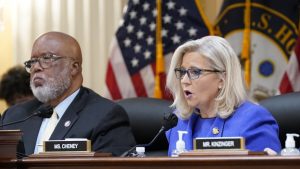 Watching the first installment of the January 6th Committee Hearing — especially re-viewing the attack on the Capitol, complete with previously unseen footage — turned my stomach. How any Republican can keep a straight face while spreading the lie that the insurrectionists were merely tourists is beyond me. I suppose it helps to have no soul.

Will it, and the subsequent hearings to come, have any impact? Not on the Trumpsters who only consume Fox News, which didn’t just refuse to air the proceedings, but instead showed its usual lineup of primetime propagandists as they mocked them.

It also marked the only time in my life I’ve felt good about someone named Cheney. Dick’s daughter, Liz, the congresswoman from Wyoming, looked like a federal prosecutor in presenting the first part of the case against Trump, the Proud Boys, the Oathkeepers, and the other extremists who nearly destroyed democracy that day. Watching her and Chairman Bennie Thompson telling the story, piece by piece, must be what it’s like watching an Assistant District Attorney work a grand jury towards an indictment.

Because her party has been overtaken by Trump’s deplorables, Cheney has no doubt lost any chance of reelection this fall, but she deserves credit for standing against the Liar-In-Chief — like the guy in front of the tanks in Tiananmen Square in 1989. Unfortunately, she’s the lone wolf standing out in the field of sheep that is the GOP.

What truly saddens me is knowing that the final outcome of that day — Vice President Pence confirming that Joe Biden would be our next president — was not the end of the story. It was, as we’ve seen in the last 17 months, far from it. The GOP, at both the federal and state levels, continues to twist and grossly distort the basic tenets of American elections, right before our eyes, forsaking majority rule and instead increasing the power of their minority.

If that takes white supremacists, anti-government zealots, and bald-faced liars to accomplish, well, as I wrote last month, their means justify their ends. That includes the 147 Republican members of Congress who voted against certifying the valid election results on the same day they had to hide from the angry mob — and are still spreading every evidence-free falsehood they can invent.

Keep in mind that many of them are the same people who put up Blue Lives Matter banners on their lawns, yet haven’t said a word against the insurrectionists responsible for the deaths of five Capitol Police officers. Worse, 21 of them voted against granting the Congressional Gold Medal to the officers who tried to defend the Capitol on January 6th, 2021.

This is not just a battle for democracy, but for reality, facts, and truth, too. Our only hope is that Attorney General Merrick Garland and the Department of Justice took notes on the evidence presented last night and will use it — along with whatever is to come — to proceed with indictments of not just the “tourists” who broke into the Capitol, but of the man at the top who incited the whole thing with his brazen lies about the election he lost.

Here’s a question I’d like to see asked of those who worked for Trump in the White House — including his daughter, Ivanka — knew his stolen election claims were bullshit, and tried to convince him to call off the insurrectionists. Since your testimony to the committee shows you clearly had a sense of how damaging his actions were to the nation, why didn’t you immediately quit your job and go public with what you knew? You could have been seen as heroic whistleblowers reinforcing what many of us already knew — the emperor had no clothes.