The Business Of Lies 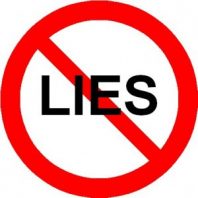 I’ve had several people ask me what I think of the decision last week by Facebook and YouTube to ban content from Alex Jones after Apple acted first to remove his Infowars podcasts from the iTunes store. The answer goes a little deeper than that.

In each case, the companies said Jones had violated their terms of service with his hate speech. Predictably, his supporters are claiming his First Amendment rights have been violated, but — as I’ve written countless times before — no one has a constitutional right to have their words printed in any medium. As long as the government isn’t involved in the action, private companies can curtail the use of their platforms by anyone, for any reason. Your right to free speech does not include your right to demand anyone else distribute what you say.

The bigger problem has been the advancement of so many media outlets that are willing to distribute such content. When I started my radio career, it was made clear to me that I couldn’t go on the air and lie about anything or anybody. If I talked about something, I had to have my facts right. I can remember a time when, if I said something wrong — nothing controversial, just a factual error — my phones would light up with listeners who wanted to correct me.

When it happened, I would refer to those callers as The World’s Most Intelligent Audience because they knew pretty much everything. Sometimes I would jokingly ask, “What’s the atomic weight of boron?” or “Who played second base for the 1968 Detroit Tigers?” or “What was the name of Tom Cruise’s first wife?” and within seconds someone would call in with the answer. And this was in the pre-internet era, where they couldn’t Google it — they knew it off the top of their heads. So, when multiple people reported that I’d said something wrong, I knew I had. In fact, if I only got one call claiming what I’d said was incorrect, it was more likely that it wasn’t, or every one of our phone lines would have been inundated.

Knowing that I got something wrong actually hurt me physically — and not just in my nitpicky brain. I’d get a pain in my stomach that would often remain even after I’d gone on the air and corrected myself. It was a combination of embarrassment and shame because I’d been taught that errors were to be avoided. Thus, the thought of making any sort of bogus Brian Williams-like claim was out of the question.

Unfortunately, today’s broadcasters, bloggers, podcasters, writers, and other content providers seem to have no such compunction, for they willingly and repeatedly spew pure bullshit with no concern about backlash. Watch any cable news show and you’re likely to see a panel of pundits who have no problem offering ridiculous predictions in lieu of analysis. Often, they do so because they want to advance their own agenda, or defend politicians they want to help keep in office (or get elected). Sometimes, they do it merely to create a reaction, hoping that the more outrageous the lie, the more attention they’ll get (see “Conway, Kellyanne” in any TV news producer’s contacts list).

That’s always bothered me for the same reason I don’t like pranks — they start with a lie.

Don’t get me wrong. Lying can be very entertaining. Great magicians lie to you every time they do a trick. Great comedians lie to you to set up the premise of a joke. Great novelists lie to you when they make you believe one suspect is the murderer while delaying the reveal of the real killer’s identity. But in each instance, you knew you’d be lied to from the start.

On the other hand, when the liar is a person of authority — a politician, a TV news anchor, a radio talk show host, a priest — you don’t begin with the presumption that you’re about to be handed a load of crap. Having consumed their content before, some of which may have been truthful, you tend to believe everything else they present, which is why it’s so easy for them to pass off bogus information as facts. Thus, if you’re a stalwart Alex Jones fan, you’d likely buy his claims that little kids who were killed in the school shooting at Newtown were merely actors. Or if you’re a regular Reddit reader, you might have fallen for the horrible Pizzagate assertions that Hillary Clinton and other Democrats were running a pedophile ring out of the basement of a pizza place in Washington, DC. Or anything Rush Limbaugh has said about feminists and liberals over the last thirty years. Or perhaps you’d fall for the repeated lies of our nation’s current Top Con Artist, Donald Trump, who spent years claiming that Barack Obama was not born in the United States of America.

I’d bet that none of these people ever suffered that sick feeling in the pits of their stomachs that I still have when I get something wrong. To the contrary, when a journalist or historian or regular person rebuts their claims, they don’t thank them for the correction and inform their audience, they double down on the nonsense and denounce the fact-checkers as “fake news.”

By the way, liars are not limited to right-wing extremists. There are some bullshit-spreaders on the left, too. The difference is that their numbers are much smaller and they don’t have the same size megaphones.

The talk radio industry yielded the beachhead of truth to its vast cabal of loudmouths long ago. Television news, too, has permitted itself to be corrupted by too much shame-free garbage. As technology advanced, Apple, YouTube, Facebook, and Twitter became the latest to allow their distribution channels to be manipulated by content providers with neither scruples nor consequences for their lies. That some of those outlets have tried to curtail the vitriol recently will have some impact on its reach, which is good for all of us, but it won’t stop the runaway train of deception, hatred, and misinformation.

And that’s a fact.