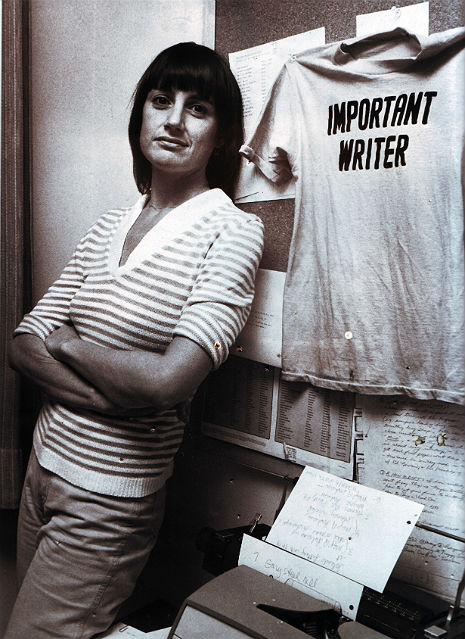 Not only has David Letterman given a few interviews as his final “Late Show” approaches, but so has Merrill Markoe, who deserves at least as much credit as he gets for changing the late night TV paradigm in the 1980s. In an extended interview with Mike Sacks, she reminisces about how their personal and professional relationship began, the rules they had to follow (and break) when they began his NBC morning show and then “Late Night,” and how she and her staff learned to write in Dave’s voice.

Markoe: I never much liked The Tonight Show with Johnny Carson. Dave used to say that Johnny Carson seemed like the hip uncle whom he wanted to please. But to me, that show was a place where they never booked any smart women. I couldn’t help but view it through the prism of my U.C. Berkeley Art School experiences, which boiled down to a simple “fuck that plastic showbiz shit.”

Sacks: What smart women in particular were missing from The Tonight Show?

Markoe: Any smart women, of any stripe. Writers, reporters, producers, filmmakers, artists, scientists, eccentrics. No comediennes ever appeared on that show besides Joan Rivers and Phyllis Diller. Certainly none of the comediennes my own age appeared on the show.

On The Tonight Show, women were either amazingly glamorous actresses or they were booked to create cleavage-related humor and flirt with Johnny. I guess there must have been exceptions I am not remembering—the opera singer Beverly Sills, for example, or Carol Burnett.

But, as a whole, there never seemed to be any cerebrally oriented female content. I thought of it as one more example of the old showbiz sensibility that I was so sick of. Johnny reminded me of Hef in Playboy After Dark. Dave could look at Johnny and see a guy with whom he could joke and communicate. I would only see the kind of guy who would want no part of me and my kind.

Markoe has a very selective memory, because while the majority of Carson’s guests may have been men, his “Tonight Show” gave major career boosts to Roseanne, Ellen DeGeneres, Rita Rudner, and several other comediennes — not to mention Bette Midler, whose performance on his penultimate show set a new standard for TV appearances. Meanwhile, I wonder how many modern female comics Markoe thinks would claim their careers started by doing Letterman’s show. And Dave has certainly flirted with tons of women in his guest chair (e.g. Julia Roberts, Drew Barrymore). Her entire complaint seems disingenuous.

That says nothing about her immensely inventive contributions to Letterman’s success. Whenever anyone talks about Classic Dave, it’s usually from the years when Markoe was his head writer. For proof, see a piece she did for Time in which she remembers her favorite “Late Night” bits.

As for Letterman, one of the interviews he’s granted was with Rolling Stone, in which he talks about his anxieties, his mistakes, his son, his wife, why he loves Montana, and what he might do after his final “Late Show” on Wednesday night. On that subject, there’s this telling passage about how he spends his average day at the office:

Letterman spends a few hours doing preproduction: talking to producers, making phone calls, reviewing monologue jokes. But he rarely goes to meetings, and he doesn’t do rehearsals. “My input now is less than it’s ever been,” he says. “They’re sick of me saying this, but I tell the producers, ‘I’m not a producer, you’re the producers. You come get me when the show is ready, and it will either go smoothly or it won’t.’ ” A knowing pause. “Which is maybe an indicator that you shouldn’t be hosting your 11:30 comedy show much longer.”

That lack of caring has been evident for some time, although the month of shows leading up to his finale have included enough people he likes as guests to have perked him up — on the air at least.