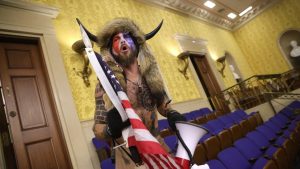 During the Civil Rights era, FBI director J. Edgar Hoover ordered agents to infiltrate Martin Luther King’s organization and others to monitor activities and get inside information about what was being planned. Throughout its history, the bureau has done similarly with other liberal groups, and probably still does to this day.

What I’d like to know is whether the FBI has been monitoring the right-wing extremists who fomented yesterday’s domestic terrorism at the Capitol. The Southern Poverty Law Center (of which I’m a proud, longtime supporter) has been tracking them for years and years. It wouldn’t even have been too difficult, because no one had to go undercover to see the planning. It was done in the light, on Parler, Reddit, Facebook, Twitter and other social media platforms. There were messages that encouraged brainwashed zealots to go to DC and attack the Capitol yesterday, with explicit details on how and where to assault the building.

While what happened was sparked by Trump’s incitement, this was not a spontaneous event. If the FBI or other intelligence agencies had advance information, why weren’t authorities more prepared? Why was there a thin line of Capitol Police instead of a large force wearing riot gear ready to repel all invaders? I haven’t seen one image from yesterday of a cop kneeling on the neck of an idiot in a MAGA hat.

Rather, I saw the rioters being gently escorted from the premises, not in handcuffs, not taken to jail. That’s a far cry from what the response would have been if the interlopers had been Black — or Muslim. One could easily conclude that many Capitol Police officers didn’t lift a finger because if they’d been out of uniform, they would have been on the other side of the insurrection. Instead, they allowed the Confederate flag to be paraded through the building, a blasphemy that never happened during the Civil War (I paused for a moment before typing that and considered calling in the “First Civil War,” because we seem to be on the brink of an ugly sequel).

This was surely not the last time we’ll see Trump extremists trying to use force and threats to impact public policy. Even as it went down, similar incursions took place in a dozen state capitals. Today, those who trespassed inside the US Capitol are being hailed as heroes by their MAGA-loving friends. Those who didn’t go are being told lies by right-wing media and sites that the people who did damage, and many of those on the Capitol steps, were left-wingers sent by Democrats. That’s after months in which Trump’s cult members were urged to perform acts of violence and rebellion with bullshit lines like “stop the steal.”

I have already had to unfriend, block, and delete more than a dozen people on Facebook who, in comments under my posts, are spreading lies about how “antifa” is to blame — false claims being fed to them and repeated by the disinformation outlets inside their bubble.

Several months ago, I tried to reassure friends that when January 20th comes, if Trump doesn’t leave the White House peacefully, he would be escorted out forcefully by the Secret Service. But a few days ago, I read a report that the agency wouldn’t want to pit its agents against each other — meaning the new Biden protection detail vs. those who will continue to protect Trump once he’s out of office (like all ex-presidents). After seeing how the Capitol Police literally opened the gates for the mob yesterday, then did nothing while the attackers moved at will throughout the building — with some officers even posing for selfies with the terrorists — I’m not so sure we can count on any branches of federal law enforcement (e.g. Secret Service) to do the right thing when the time comes.

There was some irony in yesterday’s events. One is that rioters’ actions caused some GOP senators to withdraw their objections to the certification of Joe Biden’s election victory, which finally happened in the wee hours of the night. Not all of them changed their minds, including Missouri’s vile Josh Hawley, who is already mentally measuring the drapes in the Oval Office for his own inauguration, which he’s sure will occur on January 20, 2025. If you think he’s not representative of the right-wing extremists who run this state, you should note that Governor Mike Parson today said Trump was not responsible for yesterday’s attack on the US Capitol. He’s wrong, but blame must also be laid at the feet of lying opportunists like Hawley, who not only raised his fist in encouragement to the domestic terrorists as they approached the Capitol, but also sent out fundraising appeals during the coup attempt.

The other piece of irony from this week, overshadowed by yesterday’s events in DC, was the election of both Democratic candidates for the US Senate from Georgia, which means Mitch McConnell will not longer be able to terrorize the legislature as Majority Leader. Who’s responsible for that? Well, surely voting rights heroine Stacey Abrams. But GOPers sour about their losses should also blame Trump and whack jobs like Lin Wood, who spent so much time telling lies about the presidential election being stolen that they depressed turnout from Republican voters who would surely have given the win to Perdue and Loeffler. Instead, the Peach State will now be represented, for the first time ever, by both a Black man and a Jewish man — quite a turn of events in a region where racism and anti-semitism are traditions going back centuries.

There have been some Republican legislators stepping forward to denounce yesterday’s action from Trump’s cult. Many of them invoke the phrase, “This is not who we are.” But the truth is this is exactly what the GOP is — and has been for a long time. Why I can see that from behind my keyboard but the FBI, Capitol Police, Homeland Security, and other federal law enforcement agencies haven’t is a question that must be investigated.