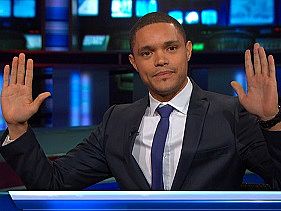 With Jon Stewart planning to leave “The Daily Show” later this year, who will the new host be? We know it won’t be Jason Jones or Samantha Bee, as they’re leaving for projects on TBS that start this fall. It won’t be any of the alumni, and the talent bench isn’t very deep (Jessica Williams has been there the longest, but that’s only a couple of years, and says she doesn’t want the job). Other names from the comedy universe have been tossed around, but none of them will get the job.

The producers and Comedy Central execs have chosen…Trevor Noah.

Who? Noah is the South African comedian who joined TDS in December and has been on to do commentary a total of three times. He’s been fine in his limited role, but will he be good enough to guide the ship, not just as host but as the driving force of the show? That remains to be seen, as does the question of whether TDS viewers, who have tuned in for years to see Jon Stewart’s intelligent snarky take on politics and media, will continue to watch.

Comedy Central has already gone through a big change with Larry Wilmore replacing Steven Colbert, and though I haven’t seen the ratings, I bet they’re down. Though we like him, and it’s nice to see an African-American hosting a late-night comedy show, my wife and I abandoned Wilmore after a couple of weeks because the show didn’t live up to our expectations (e.g. the panel segment still has too many guests who don’t get enough time to establish themselves or say anything much).

At least Wilmore was well known to Comedy Central audiences because he’d appeared so often on TDS. Noah is essentially an unknown, and breaking in a new guy (there’s still a pronounced lack of female talent on all the late-night shows) will be tough.

We’ll give him a chance, but he has some mighty large shoes to fill.