The News Network No One Watched 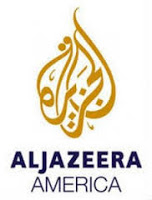 This is the first time I’ve heard oil prices blamed for the death of a TV network. Al Jazeera America is going to close up shop because the country that funds it, Qatar, made rich by oil and natural gas exports, is having a fiscal crisis because energy prices have dropped so low.

There are some pretty decent broadcasters on Al Jazeera America, including John Siegenthaler, Tony Harris, Randall Pinkston, Richelle Carey, and Del Walters, but nobody in the US will notice its absence, because no one watched the channel — just like no one watched its predecessor, Current, which Al Gore started and eventually sold to Al Jazeera for $500 million. I think they only times I checked out AJAM were when my brother Seth appeared as a guest on labor and employment issues. It felt like my tuning in to watch him was literally doubling their viewership.

The only other time anyone paid attention was when AJAM recently made news of its own by reporting that Peyton Manning has had performance-enhancing drugs (HGH) mailed to his home. He denied it, and the story went nowhere. Just like the network that broadcast it.

When you have a ton of money behind the scenes, you can support a money-losing, little-watched network. That’s how Bloomberg TV stays on the air, right? I’ve never heard a single person reference that channel, ever, yet the billionaire who owns the company doesn’t seem to mind. The same is true of many religious broadcasters, on both radio and television. Their audience is almost immeasurably small, but the funding keeps rolling in from somewhere behind a curtain, and their production values and talent costs are obviously low, so they stay on the air regardless of whether anyone tunes in.

How ironic that anchors and reporters at AJAM who reported on gas prices dropping to under $2/gallon didn’t realize that they were simultaneously telling the world, “And that’s why I’m about to be unemployed.”