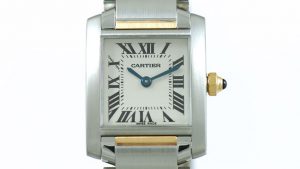 I stopped wearing a watch over a decade ago when I got my first iPhone. I always considered watches a single-use utility, not jewelry (which I don’t wear, either), so they outlived their usefulness to me once I had a multiple-use device that provided the same information. That day, I put my watch in a drawer and haven’t looked at it since.

I remember when my parents gave me my first watch. I was probably about six, and putting it on my wrist made me feel a lot older. All day long, I hoped that someone would ask me what time it was so I could show them what I was wearing, complete with a Speidel Twist-O-Flex watch band. But four decades later, that special feeling was long gone.

The other day, I found myself, ahem, killing time while waiting for a friend outside a fancy watch store — the kind that caters to people whose view of watches is diametrically opposed to mine, and they’re willing to pay big bucks for them.  I glanced at the wares through the window.

The craftsmanship was undeniably beautiful, but what caught my eye was a series of watches with Roman numerals on them, and I noticed that on the face of each, the number 4 was represented by IIII instead of IV. Not only had I taken four years of Latin in high school, but I vacationed in Rome a few years ago, and I knew that’s not how the Romans did the four.

After a minute, a well-dressed salesman walked out of the store to greet me. In these extremely upscale strips of stores, I always think the employees must spend most of their day very bored, because there are rarely any customers inside. Every time I pass one, the person on duty is standing around doing nothing, with no one to talk to, let alone assist in the purchase of some ridiculously expensive item. So the watch salesman either saw me as a potential mark or at least another human being he could converse with.

He asked if I had any questions, and I said I was curious about the IIII. He explained that it was a common practice in the industry known as “the watchmaker’s four,” used because people might confuse IV with VI. That made no sense to me, as I have seen watches that have no numbers on them at all, and any adult who has ever seen an analog clock could still tell when one of the hands was pointing at the 4, rather than the 6. I don’t know anyone who ever showed up ten minutes late for a meeting and used that excuse.

I also pointed out that the IV vs. VI claim didn’t hold water because these watches used IX for 9 and XI for 11 — why weren’t they worried that people would confuse them? The salesman replied that there are watchmakers who use VIIII (“the watchmaker’s nine”) for that reason, but this designer chose to only use the watchmaker’s four.

Then he went into super-sales mode, trying to convince me that these watches not only kept perfect time (which my iPhone also does), but looked beautiful on the arm and were also very good investments. On the last point, his pitch was, “When you die, what will you have to pass along to your children that’s really valuable? Certainly not your iPhone, which goes down in value every year while these grow in worth.”

I resisted the urge to say something snarky (“My daughter will get my prized collection of ballpoint pen caps that I once chewed in seventh grade”). Instead, I told him he was very good at his job, but I would not be buying any of his products. Fortunately, that’s when my friend showed up, so I thanked the salesman for the conversation and excused myself.

Here’s one thing I wish I had said to the sales guy. If I were to buy a watch, I would want it to be: a) a helluva lot cheaper than the ones in that store; b) able to fulfill its single purpose both reliably and consistently. And consistency does not include making up your own rules for Roman numerals.

On the other hand (pardon the pun), I wonder if the next generation, who will be even less likely to wear timepieces on their arms, will understand that pushing up your sleeve and tapping your wrist is physical shorthand for, “C’mon, we’re late!”