Their Ends Justify Their Means 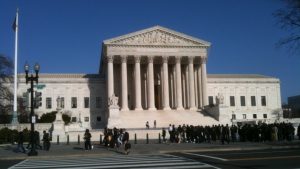 If you’ve ever wondered how evangelicals could support a serial liar, adulterer, and sexual harasser like Donald Trump, your answer came this week with the leak of a Supreme Court opinion that will overturn Roe v Wade.

Like the large numbers of Republicans who have been steering the electoral process at both the state and federal level for decades, nothing mattered except making abortion illegal in as many parts of the United States as possible. Thus, putting Trump in the White House would guarantee that their anti-choice judges, chosen by the right-wing Federalist Society, would not only end up on the Supreme Court, but on plenty of other federal benches, as well.

To accomplish that, nominees like Amy Coney Barrett, Neil Gorsuch, and Brett Kavanaugh felt no compunction about lying to the Senate during their nomination proceedings, publicly proclaiming that Roe v Wade was “settled law” they had no intention of overturning. After all, even when they were shown to be telling bald-faced lies, what was anyone going to do about it? Once they were on the bench, they’d never be impeached, which is the only way they’d lose their seats.

Meanwhile, the GOP’s extremist agenda was being pushed into impossible-to-overcome majorities in more than half of the country’s statehouses. From there, they could subvert the voting rights of tens of millions of Democrats by gerrymandering legislative and congressional districts to ensure they’d maintain power and control. All of their claims about rigged elections were 100% true, but they were the ones doing it.

Ethical? It doesn’t matter, as long as they got what they wanted — regardless of the number of times they whined about “an activist court.” What that always meant was justices didn’t rule the way they wanted them to.

To those wondering why the Democrats don’t do something, the answer is they don’t have the numbers. Yes, they have half the Senate plus the Vice President’s tie-breaking vote, but two of their majority — the anti-choice Joe Manchin and the pro-stubbornness Kyrsten Sinema — will never do away with the filibuster. Without that, Dems can’t get close to the sixty votes necessary to pass a pro-choice bill into law.

Those two holdouts (and probably others in the Democratic caucus) believe the Senate should always be about working out differences, and if you can’t convince ten Republicans to vote your way, you just weren’t trying hard enough. In other words, they hold onto the hope of reaching a compromise, which in GOP-speak means you have to make concessions galore while we don’t budge an inch.

Even if Democrats miraculously increase their numbers in the Senate to a filibuster-proof majority, what makes anyone think any pro-choice law they pass will not get rejected by this Supreme Court, where the newest three members will be ensuring their party’s dogmatic policies for decades to come?

Last summer, I wrote a piece called “Minority Rule,” about how the right wing accomplished all of this without having public support on their side and the fact that their members of Congress represent far less than 50% of the country. But with the undermining of democracy at every level, as well as the nonsense that is the Electoral College, they have managed to put men in the White House who didn’t win the popular vote. As long as they advanced to the presidency and did the bidding of the puppet-masters, it didn’t matter how outrageous their public statements were (Trump) or how dumb they were (Bush 43). All that mattered was fulfilling the agenda.

Democrats like to crow about strong dissenting opinions offered by justices like the late Ruth Bader Ginsburg — who hurt the cause by not retiring while Obama could replace her — or Kagan and Sotomayor. But those opinions mean nothing in the bigger scheme of things. It’s like praising the play-calling of a coach whose team has lost the Super Bowl. Losers don’t get the Vince Lombardi Trophy or the capacity to change the law.

Celebrating those dissenting opinions has just as much impact as marching through the streets in protest. Remember the pussy hat rallies after Trump was inaugurated? While they let progressives blow off steam, what did they change? While Democrats have been making signs and getting parade permits, Republicans have been twisting the legal process to do their bidding in state capitols, courts, and even having the wife of a SCOTUS justice work to overthrow the results of a presidential election.

When I say the GOP’s ends justify their means, don’t think overturning Roe v Wade is the end. Once they re-take the White House and Congress — and do away with the filibuster because it’s in their way — you can probably say goodbye to gay marriage, the right to birth control, oral abortion medication, and other issues that have been part of their extremist playbook for a long time.

Come to think of it, I should have titled this piece, “WOMEN WHO FUCK ARE FUCKED.”

[hat tip to David Pepper, whose Twitter thread on this subject inspired me to post these thoughts]