Then Who Should Run, Maureen? 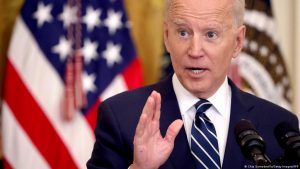 Maureen Dowd wrote a piece a few days ago about why Joe Biden should not run for re-election in 2024.

This, after a string of very good news the president has had in the last couple of weeks, including convincing Joe Manchin and Kyrsten Sinema to sign on to his Inflation Reduction Act, which will finally attack climate change, lower prescription drug prices, and force corporations to pay more of their share in taxes. You can credit the killing of the top guy in Al-Qaeda to the US military, but it was accomplished while Biden was Commander-In-Chief. And on Friday, the jobs report showed more Americans working than ever before, a direct result of Biden’s economic policies.

The worst aspect of Dowd’s lazy meme repeating is she left out the most important part of the equation— which Democrat would have a better chance of winning if Biden withdrew? Amy Klobuchar? Gavin Newsom? Pete Buttigieg?

Dowd is far from alone in this kind of Beltway Pundit talk, which drives me crazy. It’s all merely guessing about the future, making all sorts of suppositions and predictions without being held accountable.

Show me a Maureen Dowd piece from August, 2018, in which she argued that Joe Biden was the best candidate for the Democrats and would beat Trump two years later. In fact, virtually no one was making that case at the time — the same point in that election cycle we’re in now for the next one.

If Biden doesn’t run again, you’d have to see Kamala Harris waiting to do so. In a general election against whichever White Supremacist becomes the GOP candidate, she would almost certainly get 100% of the Black vote, which no Democrat can win the presidency without. Remember, it was that voting bloc, led by Jim Clyburn, that threw its weight behind Biden, made him the nominee, and put him in the White House.

Dowd et al don’t write about Kamala in any positive sense, instead repeating the DC group-think talking points about her — which the general public has no sense of because no vice president attracts the spotlight of success while in office. I’m not hyping Kamala by any means, and I’m not going to claim I have any idea whether she’d be a formidable contender in 2024, but neither do Dowd and her classmates from Punditry University.

They are the same experts who, two years out, didn’t foresee Barack Obama overtaking Hillary Clinton in 2008, or Bill Clinton emerging and winning in 1992, or even Jimmy Carter’s path to victory in 1976.

The only true, honest answer anyone should give when asked about what the 2024 matchup will be is, “I don’t know. It’s still too early to tell.”