This Is Not Fake News 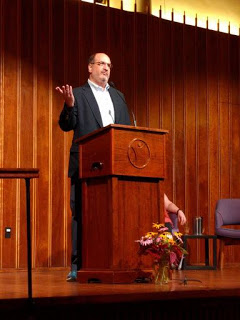 Fifteen to twenty years ago, my inbox was regularly filled with emails that people had forwarded to everyone on their contact list. Those emails contained stories, or links to stories, about how a cursed mummy had caused the sinking of the Titanic, or how a guy named John Hanson was the first president of the United States of America, or that during wartime, the Seal of the President of the United States is modified so that the eagle’s head faces the opposite direction, or that the average woman swallows six pounds of lipstick during her lifetime.

Every one of those stories was false. But because someone they knew had forwarded it to them, the recipients merely kept the game of operator going by passing it along to everyone they knew — which, in many cases, included me. And I was usually the end of the line, because unlike all the others in the email chain, I took the time to look up the stories on a website called Snopes, which called itself the Urban Legends Reference Page.

It was run by David and Barbara Mikkelson, a couple in San Francisco, who had taken it upon themselves to research these oddball stories to see if they could be verified. The vast majority of the time, the Mikkelsons ended up debunking the stories. Since I relied upon Snopes so much, I invited Barbara to make regular appearances on my radio show to talk about the newest urban legends. It became a wildly popular feature of my show but, unfortunately, it only increased the volume of emails I received. I replied to most of them simply by recommending the sender go to Snopes first before forwarding any more urban legends.

The Mikkelsons are now divorced, but David and a staff of researchers continue to investigate all sorts of stories and claims, and their work has not gotten any less challenging. I continue to use Snopes as a reference source. Those e-mail chains don’t exist anymore because social media — in particular, Facebook — has made it even easier to spread rumors and bogus stories or, as they’re now called, fake news.

I don’t like that title, because there’s nothing wrong with fake news. Anyone who has read The Onion knows that made-up headlines and stories can be funny. For instance, from just this week: “Millions of policy proposals spill into sea as Brookings Institution think tanker runs aground off Crimea coast”; “Hellmann’s introduces new meat-on-the-bottom mayonnaise cups”; “Man keeping running total of how many people in the gym are in worse shape than him;” and “Queen Elizabeth kicks off Wimbledon by serving ceremonial first ace of tournament.”

Those headlines are fine because the only agenda of the people who wrote them was to make you laugh. The problem comes in when bogus news stories are created by people whose agenda is more nefarious. That can be a business trying to spin a negative report about its products into something positive. It can be a defense lawyer offering up another explanation for the details of the crime their client is charged with. It can be stories distributed with the sole purpose of affecting the outcome of an election. Or it can be a spokesperson going on television and arguing in favor of “alternative facts.”

Whenever I hear that phrase, “alternative facts,” I’m reminded of what’s said by scientists about “alternative medicine.” That is, if “alternative medicine” really worked, it would be called “medicine.” The same for facts. If they’re not true, they are not facts. Facts don’t change based on your opinion. Just because you don’t agree with something doesn’t mean it’s not true. For instance, whenever I get on my scale and look down at the number, I can’t believe it. That doesn’t mean it’s false or fake.

Speaking of “alternative medicine,” let’s talk about the bogus news produced by some promoters of that pseudo-science. People like Dr. Oz, whose claims about bogus weight-loss products got him a scolding by Senator Claire McCaskill during a congressional hearing. Or Dr. Samir Chachoua, who claims he has developed an AIDS cure from the milk of arthritic goats. Of course, he has offered no supporting evidence to back up his claims.

In particular, let’s talk about Gwyneth Paltrow, whose website Goop pushes nonsense like $66 jade eggs women should put in their vaginas to be healthier. It also claims that crystals make you healthier by transforming your energy, suggests you get colonics and cleanses regularly, and promotes homeopathic products. None of those claims have any valid evidence to back them up, or any basis in science, and yet Paltrow and her fellow Goop-sters keep publishing this crap and her audience not only eats it up, but spends millions on the bogus products she sells on the site. If you want to know more about this, get Tim Caulfield’s book, “Is Gwyneth Paltrow Wrong About Everything?” (spoiler alert: yes!).

That sort of lying is truly dangerous, because it causes people to rely on pseudo-science instead of real science when making important health decisions. Take the anti-vaccination movement, whose entire argument is based on long-debunked research that claimed vaccines cause autism. The original claims by Andrew Wakefield were based on data he manipulated to get the result he wanted, and they have been disproven time and time again. And yet, too many people in this country and elsewhere are fearful that giving their kids their shots at the right age will cause them harm — again, despite no evidence!

The more people who believe that garbage, the greater the risk to herd immunity, which can only be achieved if everyone has been vaccinated. In communities with large numbers of anti-vaxxers, we’ve seen outbreaks of measles, chicken pox, and other diseases that could be obliterated by science — but you need the public to get with the program.

A couple of years ago, I saw an anti-vaccination advocate on TV try to bolster her argument by claiming the pharmaceutical companies that make vaccines aren’t worth our trust. She asked, “Do you know that the companies that make these vaccines have made over $40 billion from them?” To which I responded by yelling at my television, “Good! I’m sure the people who make brakes for cars have made a lot of money, too, but that’s not a reason to let your kids get in a car without brakes!”

It’s that kind of fear mongering, ignoring the facts, and promoting uncertainty and disbelief in proven medicine that leads to sickness and, in some cases, the death of small children. I’m hard-pressed to think of something more evil than that, and it’s all because of bogus news stories.

Tomorrow in Part 2: mistakes, lies, and how you can know when a news story is real.