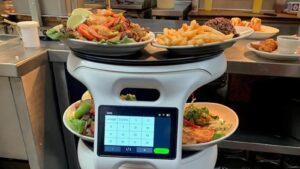 I had heard about restaurants using robots to make fries, pour drinks, and deliver food to customers at their tables, but I’d never seen one in action until Friday.

I was having lunch with a friend and, as we talked, I noticed something rolling by. It turned out to be a Servi robot, bringing several plates of food to one of the other tables, where a half-dozen people were waiting. The robot couldn’t carry all the orders at once, so a waitress followed behind with a full tray. The robot stopped on its own the table and the human handed everyone their meals. Then she pushed a button on the robot’s display to make it return to the kitchen to fetch food for another table.

It didn’t bring our lunch, though — a human waiter did that, so I took the opportunity to ask his thoughts on the robot. He said at first, he was worried it would take someone’s job, but because restaurants are having so much trouble finding people who want to work for the low wages the business offers, it didn’t have any impact on the number of employees. He also told me having a device that helps deliver orders gives him more of a chance to interact with customers and serve more tables during a busy lunch rush. If that’s helping put more tips in his pocket (and they don’t have to be shared with some IT person who makes adjustments to the robot when it inevitably glitches), while not forcing any employees out the door, it sounds like a win-win to me.

How long will it be before Hooters and Tilted Kilt have serving robots that look like Alicia Vikander in “Ex Machina,” Thandiwe Newton on “Westworld,” or the Fembots of “Austin Powers: International Man Of Mystery”? If you don’t get those references, I’ll leave it to you to search Google Images to see what I mean.

Or, if the restaurant’s target demographic is older baby boomers, you could have it exclaim, in the voice of the robot on “Lost In Space” (the late Dick Tufeld), “Warning! Warning, Will Robinson! This plate is hot!!”

Meanwhile, I welcome our new robot server overlords. As long as they bring me food!