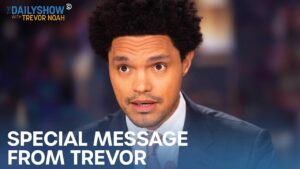 Trevor Noah announced tonight that he’s going to leave “The Daily Show” after seven years as its host. In doing so, Noah didn’t reveal when his last time behind the desk would occur, nor give any indication of who he’d like his successor to be.

Anyone who tells you they know who his replacement will be is lying. The execs at Comedy Central don’t even know that yet. Frankly, I don’t even know who would be in the conversation as the show’s next host. Remember, no one predicted Noah would get the job in 2015 when Jon Stewart left.

But I do know that Noah was an inspired pick. Other than in a few bits he did as a correspondent on the show, he was an almost entirely unknown (in America) comedian from South Africa, who tackled the unenviable task of taking over a franchise which had thrived and created viral buzz for a long time. It took a while, but he managed to make it his own. That’s not easy to do.

Truth be told, I stopped being a regular viewer of “The Daily Show” several years ago, around the same time I gave up Stephen Colbert and the other late night hosts (and even nightly newscasts) because I was tired of the endless recitations of the newest Trump debacle of the day. Oh, I’d check in with Noah every once in awhile, or watch a clip on YouTube, but my “Daily Show” habit was broken.

I never blamed Noah, because when I did catch a few minutes of him, I thoroughly enjoyed what he was doing. In fact, Martha and I went to see him perform as a standup whenever he came to St. Louis, and I was really impressed by his act (and his autobiography, “Born A Crime”).

It will be interesting to see what he does next, and who earns the chance to sit in “The Daily Show” host chair next.