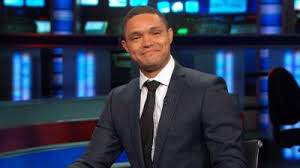 It’s been more than a month since Trevor Noah began hosting “The Daily Show,” and he has, for the most part, kept the basic show concept alive and well-tuned. Of course, the template was already in place from 14 years of Jon Stewart, and Noah was smart not to toy with it too much. The key to its success has always been two-fold: clever writing and great video research. No other show has doggedly mined the archives to find so many perfect clips — with the possible exception of John Oliver, who learned at the hand of the master.

Speaking of Oliver, his “Last Week Tonight” on HBO has taken over the mantle of must-see late-night television from all the others. He has consistently taken on important issues (most of which no one in the mass media talks about) with just enough humor to keep the show from turning into a dry documentary. I can’t remember seeing a comedy show hitting on all cylinders week after week like Oliver’s.

But back to Trevor Noah. While he’s kept the “Daily Show” rolling down the same track it’s been on for over a decade, I have three pieces of constructive criticism:

First, he has to stop reminding us he’s from South Africa and finds many American ways of life odd. It was cute the first few times — and his take on the American health care system after an emergency appendectomy last week was very amusing — but there’s no need to prove his immigrant status every night. Enough with the snide fish-out-of-water remarks.

Second, he has to stop laughing out loud at his own material. It’s almost as obnoxious as when Bill Maher does it. I’m sure it’s a crutch, a cue he thinks viewers need as proof that he’s said something funny, but he must get over his insecurity about the material — it’s fine and doesn’t need his own acclimation. It comes off as desperate, and is especially out of place because we know that he didn’t just hear a particular line for the first time. If he didn’t write it, he certainly approved it, and then rehearsed it before performing it in front of the studio audience and cameras. Laughter should be spontaneous, and his isn’t.

Third, Noah should work on his interviewing skills. Again, it’s tough to avoid comparison to Stewart, who was brilliant at it (except when his guest was a fellow comedian he’d known for years, in which case the conversation turned into old-pals-poking-fun-at-each-other-with-inside-jokes-we-didn’t get). If Noah is taking the time to read his guests’ books, see their movies, and watch their TV shows, it isn’t apparent from the lame questions he asks. It seem he has no real interest in anything they have to say and isn’t even listening. If that’s the case, then don’t have a guest every night — save it for when there’s someone or something he’s passionate about discussing.

On the bright side, the breakout star of the new “Daily Show” is correspondent Roy Wood Jr. His ready-for-anything-but-seen-it-all attitude and wit jumps right through the camera. The other new members of the team, Desi Lydic and Ronny Chieng, haven’t shown us anything special yet, nor has leftover Hasan Minhaj, but every time Wood is on camera, I can’t look away, and that’s been true since his first appearance. He’s a good addition to the one-two punch of Jessica Williams and Jordan Klepper (both of whom got off to rocky starts, but have become excellent go-to performers).

Trevor Noah’s “Daily Show” will continue to evolve within the confines of its predetermined format, and the rough edges will get smoother over time, but it’s still a work in progress.