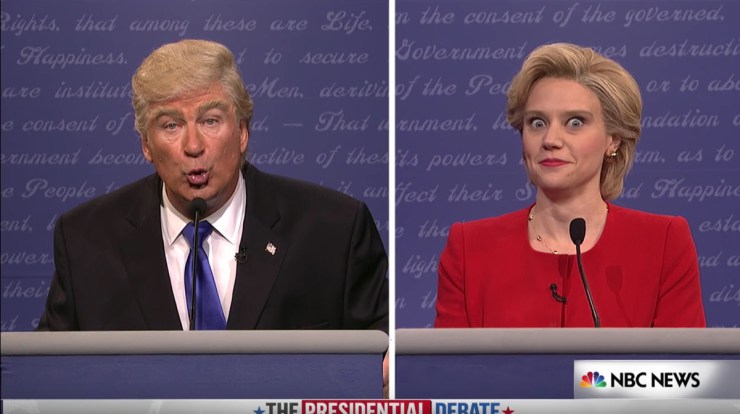 “SNL” got big numbers with its season premiere, which featured Kate McKinnon’s Hillary Clinton debating Alec Baldwin’s Donald Trump. McKinnon was great, as always, and Baldwin was fine, but I’m surprised Lorne Michaels made the decision not to have Darrell Hammond do the debate when he already has one of the best Trump imitations on TV — better than Baldwin’s, certainly.

While clever, I didn’t think the sketch was any more biting than what the other late-nighters (Samantha Bee, Stephen Colbert, Seth Meyers) had already said about the debate. In essence, it was merely a replay of the lowlights of the real-life confrontation, with nothing new to say about it. I also agree with these comments by TV critic David Zurawik on CNN’s “Reliable Sources” yesterday:

“In 2008, late-night comedy and particularly ‘SNL’ was saying the things mainstream journalism could not say — that Sarah Palin was one of the dopiest, goofiest-looking candidates we ever had. And, oh, by the way, she will probably be dangerous and a disgrace to us if she’s elected. We could not say that. They could. It was liberating.” But this year, “everybody, from editorial writers to people on the campaign trail, are saying all the things about Trump that were sort of revealed in Baldwin’s satirical take on him. And that’s a big change in the media.”

As for the revelations over the weekend that Trump lost over $900 million in 1995 and was able to use that loss carryover to not pay taxes for the next 18 years, why is anyone surprised? The tax laws are written to protect the rich, with loopholes galore that have been tailored to situations exactly like this one. Trump and his accounting team merely took advantage of the IRS regulations in place at the time. The blame should be placed squarely at the feet of the members of Congress who drafted those laws in the first place. That’s how our corrupt system works — even though there are 435 people sent to Capitol Hill supposedly to work for us, in reality, they do the bidding of the thousands of lobbyists who work on behalf of corporations and the wealthy in return for the funds that allow them to run their campaigns and line their pockets.

So, when Trump says he was smart to not pay taxes, he’s legally correct. But morally, that’s a helluva message to send to American voters, particularly the middle class: “I know how to manipulate the crooked system so that I don’t have to underwrite America’s needs, while you suckers pay for everything. I even know how to get tax breaks so you’re supporting me and my businesses!”

It’s that kind of welfare for the rich that must be fixed, but anyone who thinks a billionaire narcissist like Trump has any interest in adjusting the tax laws to be less favorable to himself and others like him is a fool.