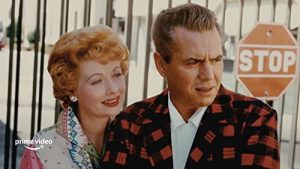 On the heels of Aaron Sorkin’s “Being The Ricardos” (which I reviewed here), Amy Poehler’s “Lucy and Desi” provides a deeper dive into the couple that starred in “I Love Lucy” and then ran one of the biggest independent studios in Hollywood.

The film is made up almost entirely of home movies and audio recordings made during Lucy and Desi’s heyday, so we get to see and hear them narrating their own lives, both at work and home. There are also interviews with the couple’s daughter (Lucie Arnaz Luckinbill), Lucy’s brother Fred, Norman Lear, Charo (!), and two women whose careers were inspired by Lucy (Carol Burnett and Bette Midler).

While the behind-the-scenes stuff about “I Love Lucy” is interesting, we don’t learn much that wasn’t already known. The parts that work best are the segments in which Ball and Arnaz spoke quite frankly about how their relationship began, grew, and eventually fell apart. There’s also a good chunk spent on how Desi built an empire — Desilu Studios — which eventually produced such seminal shows as the original “Star Trek,” “Mission: Impossible,” “The Untouchables,” “The Dick Van Dyke Show,” “That Girl,” “The Andy Griffith Show,” and others. And when all of that became too exhausting for him, Lucy — who had left the operation of the studio in his hands — bought him out and stepped up to run the business while simultaneously starring in her own new sitcom.

I give Poehler’s documentary the same score I gave Sorkin’s movie, a 7.5 out of 10. They make good companion pieces, and both are now streaming on Amazon Prime Video.