TV Review: “Pieces Of Her” 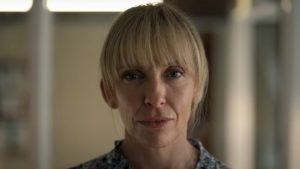 Now, Collette stars in an eight-episode Netflix series called “Pieces Of Her.” She plays Laura Oliver, who celebrates her daughter Andy’s 30th birthday by treating her to lunch at a diner. But the meal is interrupted by a random act of violence, and it’s Laura who stands up to the attacker and takes him down. Naturally, other patrons in the diner capture the proceedings on cell phone video, and pretty soon, Laura is being identified and hailed as a hero online, on TV, and in print. It’s a helluva story, but publicity is the last thing Laura wants.

At this point, I thought I was watching a retread of the 2005 Viggo Mortensen movie, “A History of Violence,” because the plots were so similar. But “Pieces Of Her” veers in a different direction, with a lot more layers of mystery to solve. I was fully gripped by the first three episodes and didn’t mind that we didn’t get a real sense of what was going on until episodes four and five, which is when the always reliable Terry O’Quinn (John Locke on “Lost”) shows up as Laura’s father. After that, the show goes back and forth in time as it unfolds even further twists about both Laura and Andy — which I won’t give away.

Of course, Collette is marvelous as Laura, a woman clearly conflicted by both her past and present. As Andy — the daughter who tries to unravel the truth about her mother — Bella Heathcote is required to play all sorts of emotions and tense situations, and she’s fully up to it. Showrunner Charlotte Stoudt keeps things moving briskly, but builds in enough time to allow the plot to breathe, and makes some great choices for the songs on the soundtrack, too.

Though I wasn’t fully satisfied at the series’ end — and cringed at the by-now-clichéd scene in which a lead character’s car is t-boned by another vehicle at an intersection — “Pieces Of Her” still qualifies as a pretty gripping piece of entertainment. It also may set a record for the number of times the word “scoffs” shows up in the closed-captioning.