Observations about a few things that were on TV this weekend: 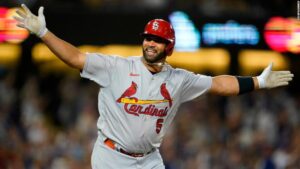 They’re not upset about the accomplishment. The outrage is because the game was on Apple TV+, instead of the Cards’ usual outlet, Bally’s Sports Midwest, and those fans couldn’t find it, so they missed Pujols’ historic swings. Never mind that they could have seen clips of the homers later on SportsCenter or YouTube or any of the local TV newscasts that aired the footage after the fact. They are irritated because they couldn’t see it live.

As one of the only humans in the St. Louis area who couldn’t care less about the Cardinals or any other baseball team, the whole thing seems ridiculous to me, because they could have watched it!

You don’t have to be an Apple TV+ subscriber to catch its Friday night baseball coverage — Apple streams the games for free. But St. Louisans are well-known for being resistant to change. Some of them still haven’t gotten over the games moving from over-the-air “free TV” stations to cable, a move dating back to 2011, when the team made a deal with what was then called Fox Sports Midwest. 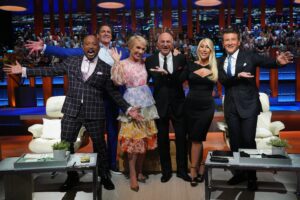 While that game was going on, ABC aired a live edition of “Shark Tank,” complete with all six sharks, three sets of entrepreneurs looking to make a deal, and a studio audience that was — as they are for every TV show — hyped up beyond all reason. There was even a special booth built for the show’s longtime announcer, Phil Crowley, who was seen on camera for the first time.

But regular episodes of “Shark Tank” depend on aggressive editing by its production team to make it a tight show, and that element is impossible in a live setting. Thus, the sharks couldn’t spend as much time as usual vetting the entrepreneurs and their products, a process that can take hours before their savvy business minds have dug down enough to decide on whether or not to make an offer. In this instance, they had about ten minutes. Were they given some of the details ahead of time?

I have more to say about this, but my friend Andy Dehnart at Reality Blurred has already said it, so go read his explanation about why the whole thing is a fiasco that should not be repeated (including the ludicrous poll questions). Unfortunately, it probably will be, because TV networks are looking for any event programming they can exploit and eke out a few extra tenths of a ratings point.

Which brings us to last night’s debut of a new, primetime edition of “Celebrity Jeopardy!”

Michael Davies — who took over as executive producer of “Jeopardy!” after Alex Trebek’s death and the Mike Richards fiasco (which I wrote about here) — has said he wants to expand the show’s brand with more tournaments and spinoffs revolving around pop culture and sports. That’s fine with me, as long as Davies and Sony (which owns the show) are careful not to overload the marketplace with too much of a good thing, as he did when he produced the original US run of “Who Wants To Be A Millionaire?”

The definition of the word “celebrity” has been stretched so thin by reality shows in the last couple of decades as to be almost meaningless, but producers still use it to differentiate showbiz people from the rest of us. Yet if I were running a new primetime venture like this, I’d want to debut with the biggest celebrities I could get, and I’m not sure last night’s trio of Simu Liu, Ego Nwodim, and Andy Richter would qualify.

They may all be fine people, but seem no better than middle-echelon stars, as is the host, Mayim Bialik. Did their presence encourage more people to watch? The list of others who will appear in future Sunday night episodes doesn’t include many highly-recognizable names, either. Compare that to the celebrity players who appeared on the syndicated version of “Jeopardy!” over the years, including Carol Burnett, Charles Barkley, Jodie Foster, Buzz Aldrin, Lynn Redgrave, Oliver Stone, Martina Navratilova, Jerry Orbach, and Graham Nash (!). No one in the current contestant cohort matches that level of celebrity.