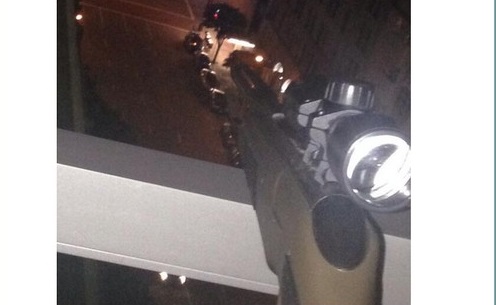 I mentioned the other day that there are times I love Twitter, such as when its users verbally thrashed anti-vaxxer Jenny McCarthy. Then there are times when I wonder what the hell is wrong with the Twitterverse.

Here’s a case in point.

A few years ago, Diane Lane starred in “Untraceable,” a movie in which she plays an FBI agent in the cybercrime division trying to track down a kidnapper who puts his victims into torture situations and posts them on a website. The hook is that the more people who view the site, the worse the torture becomes. For instance, one victim is planted in front of a bunch of heat lamps, and the more visitors to the site, the more lamps come on. Of course, the overly curious online audience goes to the site — it doesn’t help that it gets reported on TV — and the lamps ultimately scorch the victim to death.

Last Thursday, police in Los Angeles arrested Dakkari Mcanuff after he tweeted a picture of himself pointing a gun out his window at a city street, with the caption “100 RTs (re-tweets) and I’ll shoot someone walking.” The cops — who monitor social media, probably for searching for keywords like “shoot” — used the photo to figure out where Mcannuff was, and arrested him for making a criminal threat.

His friends tried to explain that it was all a joke, since a little while after his first tweet, Mcanuff posted a photo of a guy on the ground with the caption “Man down, mission complete.” Then there was another one, showing him pretending to be arrested, sitting in front of a police car. His friends said it was all part of a prank, no shots were fired, no harm was done to anyone, and the LAPD “completely over-reacted.”

Mcanuff will probably get off with a slap on the wrist, but that’s not why I bring up the story.

The problem is that his original “I’ll shoot someone” tweet was, in fact, retweeted over a hundred times! Call it virtual rubbernecking, as the sick, voyeuristic Twitterverse apparently wanted to see what would happen.

I worry more about the re-tweeters than people like McAnuff.