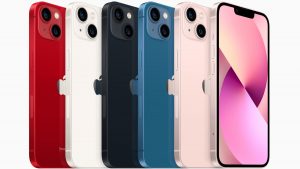 Before Apple made its iPhone 13 available to the public, I saw reviewers saying its improvements over the iPhone 12 were merely incremental. That may be true, but I had the iPhone 8 and there have been some major enhancements over the last five years, so I was determined to get the new version.

Besides, the battery on my 8 was no longer lasting through the day without a recharge. Sometimes I had to plug it in a couple of times to get it through the evening, even though I replaced the battery a couple of years ago. So I knew that the upgrade would be worth it just to start with a reliable power source, as well as new features. Plus, my carrier, AT&T, is offering some major discounts ($350 — almost half-price!), so I couldn’t resist.

When Apple does it annual dog-and-pony show to introduce a new iPhone, it always spends a lot of time telling us how much better the camera is. That may be important to some people, but it’s not a big deal for me, as I don’t feel the need to photograph my food, my face, or other boring aspects of my life on a daily basis. In fact, I haven’t taken a single picture since returning home from vacation a couple of weeks ago. That’s why I’ll never refer to my self as an Instagram Influencer.

However, the camera does have one new feature that’s very cool. It’s called Live Text, and allows a user to point the lens at any printed material, highlight it, and then immediately get more information about whatever is in that text, whether it’s a link or not. It also does instantaneous translation to and from about a dozen languages. So, if I’m in a Mexican restaurant, for example, and don’t know what a certain word means, the iPhone can tell me right away. It even works on photos stored in the phone. I can see how, paired with the built-in Translate app, this will be a valuable resource when we finally get back to international travel and don’t understand signs, menus, or directions because we’re dumb, monolingual Americans.

Any new smartphone takes a little while to get used to, and the iPhone 13 is no exception (e.g. it’s weird not having a home button anymore). I’d had trouble with the fingerprint scanner for several years (I wrote about this issue in 2019), so I love Face ID, which lets me not only open the phone, but log into apps and websites, as Touch ID did on previous models. Of course, it doesn’t work with a mask on, but the passcode still does the job. I also like Hide My Email, which allows users to use a different e-address when filling out forms or signing up for something, without revealing our real e-address. And I’m trying out Private Relay, which may eventually replace the third-party VPN I’ve used for a few years to give me even more security while browsing the web.

My biggest problem came with activating the new phone, because it had trouble restoring a lot of the apps and data I had on the old one. Even after letting it work on the matter overnight, it still hadn’t finished and appeared to be stalled. Fortunately, Apple has really good customer service, usually available without a long wait, so I called 800-MY-APPLE and was connected to a tech support person within a few minutes. She walked me through whatever was causing the problem, helped me resolve it, and then answered my questions about a couple of other new features I was interested in. I thanked her profusely for being so patient and devoting 20 minutes to my concerns.

Now, after adjusting some settings and toying around with other new features, I feel fully connected again, with a battery that easily makes it from early morning to late at night. I find it ironic that conversing with other people is my last priority for this device but, yeah, it’s a damned good phone, too.

One last thing: kudos to Apple for not being scared of the number 13. High tech and science don’t mix with silly superstitions.