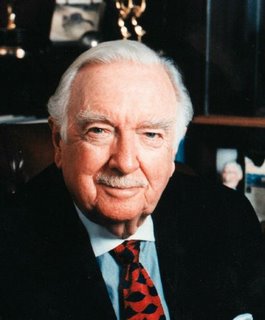 When he died in 2009, in watching some of the video obits of him, I was struck by two things: no one makes it as a network anchorman any more with facial hair and glasses, and very few of them are so trusted that they can show even a little emotion, as Cronkite did on the day he reported the death of JFK, or the enthusiasm he showed as Armstrong and Aldrin landed on the lunar surface.

I’ve dug into my archives to find an interview I did with him on June 25, 2001, in which we talked about his voice work on “Apollo 13” and his love of the space program. We also delved at length into his criticisms of television newscasts he felt had become “cheapened” by giving people what they want to know rather than what they need to know.

Cronkite also lamented the lack of reporters in foreign countries:

“These are the days when a bonfire in a little country whose name we can’t pronounce in a location on the globe we don’t know, that bonfire can suddenly turn into a mushroom-shaped cloud. We’d damned well better know what’s going on, and we don’t!”

Those words seem fairly prescient in retrospect, considering this was less than three months before the 9/11 attacks forced the networks to cover places on the map they had ignored for too long.