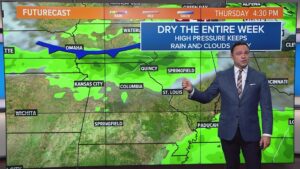 The weather in St. Louis this week has been spectacular. Temperatures around 72. No humidity. Few clouds, lots of blue sky. A ten out of ten on anyone’s scale. And yet…

As I went for walks through our neighborhood, I ran into two acquaintances and, in making small talk, mentioned how wonderful the weather was. In both instances, the response was, “Yeah, but it won’t last.” One of them said with a frown, “It’s nice today, but I heard we’re going to have a bad winter.”

What is wrong with these weather worriers? They must be the kind of anxious people who wake up every day expecting something horrible to happen. It’s not like we live in Ft. Myers and had to contend with Hurricane Ian.

Yes, the weather will be different in a few days — we don’t live in San Diego, after all — but why let that ruin your mood today?

After that dour comment about an upcoming bad winter, I replied, “Who made that prediction? Because the meteorologists I watch are never really sure what conditions will be 72 hours from now, let along 72 days.” She said, “Someone on the radio said they read it in that almanac.”

First of all, “someone on the radio” doesn’t always know what they’re talking about. Secondly, “that almanac” is probably the Farmers’ Almanac, which for decades has made long-range weather prognostications without ever being held accountable. That’s because its forecasts are as generic as most horoscopes. Here’s what the Almanac predicted last year for the first quarter of 2022:

Winter will be colder and drier than normal, on average, with the coldest periods in mid- and late December, early and late January, and early to mid-February.

Now I can see why that woman I met on my walk is not enjoying life in the present tense. Who could glory in a perfectly nice day when it’s going to be cold in February?