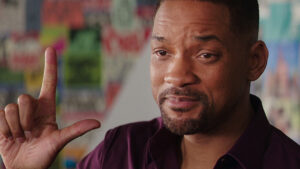 I’ve seen several reports about Apple trying to figure out what to do with “Emancipation,” the already-finished movie starring Will Smith.

The uncertainty, of course, comes in the wake of Smith slapping Chris Rock at the Academy Awards this year. He’s been banned from attending the Oscars for the next decade and his image as a fun, easygoing personality has taken a major hit. But was the infraction so egregious any movie he appears in is tainted?

Studios and filmmakers appear to believe that’s the case, but I don’t think so.

Smith has said all the right things in his apologies, which were no doubt written and vetted by his publicists, and the public blowback has revealed the fragility of movie stardom. But, in my mind, it’s not an obstacle Smith can’t overcome. It’s not like he killed or maimed Rock, or sexually assaulted someone, or was caught on video spouting horribly racist epithets.

I’m not excusing Smith’s actions in any way, but wonder how much punishment he deserves, and for how long. Is he untouchable in Hollywood forever? Should we never again watch “Men In Black” or “King Richard” or “Ali”?

Articles about Apple’s dilemma coincided with the announcement that Louis CK is starting a standup tour, including a stop at a venue near me. I won’t go see him because he hasn’t tried to make amends to the women he acted so badly towards nor offered any real contrition publicly. Still, I bet CK’s shows will sell out.

The question comes down to how long a celebrity’s cancellation over bad acts should last. In the law, there are differing levels of penalties based on offenses committed — shoplifters caught in the act shouldn’t receive the same sentence as serial killers. Similarly, each individual must decide where Smith’s slap places him on the Kevin Spacey/Armie Hammer/James Franco toxicity scale.

Apple’s already sunk a lot of money (at least $120 million) into the movie, and it’s unlikely “Emancipation” will be shelved permanently as Warners’ “Batgirl” has been. The release date has been pushed into 2023, probably in the hope that time helps heal Smith’s image.

As for me, I’ve watched Smith grow into a top-notch actor over the last few decades, deserving of the Oscar he won for “King Richard” this year. With director Antoine Fuqua (“Training Day,” “The Equalizer”) at the helm, “Emancipation” looks like another high-level production I’d want to see, and Smith’s leading role wouldn’t dissuade me.

How ironic it would be, when Apple does finally let the world see the project, if Smith’s performance is so compelling the Oscars can’t ignore him. “And the winner for best performance by a cancelled actor in a leading role is….”