Keep in mind that I don’t see every movie that’s released in the course of a year, but because I wasted my time suffering through these, I took special glee in shredding them in my reviews (which you can read in full by clicking on the titles of the films). 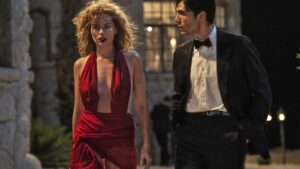 #1) “Babylon” Its plot, such as it is, follows the adventures of several people caught up in the wild environment of 1920s Hollywood: an up-and-coming actress (Margot Robbie), a nearly-has-been actor (Brad Pitt), and a gofer who eventually becomes a studio executive (Diego Calva). The only award “Babylon” might win is Most Use Of Bodily Fluids. In the first fifteen minutes, there’s elephant feces and urine. Later on, there’s projectile vomiting in quantities no human could spew. There’s a character who keeps hocking up loogies. And there’s no need for any of it. The movie also includes debauchery unlike any since Bob Guccione made “Caligula.” Shortly after the elephant scene, we’re introduced to an outrageous party where men and women are dancing, some of them clothed, many of them full frontal naked, plus simulated sex. Throughout “Babylon,” I kept thinking this is what happens when somebody gives you a blank check to make whatever you want after you almost win the Academy Award for Best Picture (remember the “La La Land”/”Moonlight” screwup in 2017?). I’ve always ranked movies on a 1-to-10 scale, but I made an exception and gave “Babylon” a ZERO. 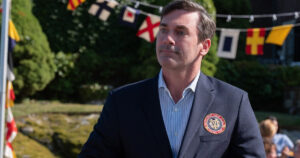 #2) “Confess, Fletch” When I first heard that Jon Hamm would star in a new Fletch movie, my first reaction was that was a good casting choice. But it took only about 20 minutes to realize why the movie was released under the radar and was quickly fading from view. It’s so terrible that if we’d been watching it at home, I would have turned it off at that point.  Though he’s undeniably charming, it turns out that Hamm doesn’t do snark well, and since that’s a key characteristic of the Fletch persona, everything he says just lies there. And when other characters do silly or unpredictable things, Hamm overreacts — as if he thinks doing so will save the lame scenes he finds himself in. It’s bad enough that Hamm somehow was talked into doing this dreck, but director Greg Mottola told an Uproxx reporter that the star gave up 60% of his salary so the movie could be finished. In return, Hamm got another 11% of the gross revenue. Oops! 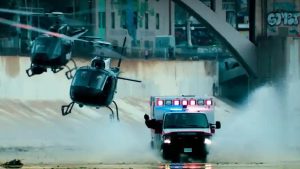 #3) “Ambulance” The plot is simple. A bank robbery in downtown Los Angeles goes awry. The cops kill everyone except Danny Sharp (Jake Gyllenhaal) and his half-brother Will (Yahya Abdul-Mateen II), who escape by stealing an ambulance that’s on the scene to help a wounded cop. But the brothers don’t just take the ride, they also take the cop and the EMT (Eiza González) as hostages. From here, you have about two hours of chase scenes that somehow are never slowed down by LA’s notoriously horrible traffic, with helicopters and a couple dozen police cars in pursuit. This would not be a stereotypical movie chase if the vehicles didn’t smash through some fruit carts, push other vehicles aside, and — in the case of the patrol cars — flip over and/or go flying off various obstacles that the ambulance somehow avoids. Oh, yeah, there’s also a sequence in which Gyllenhaal and Abdul-Mateen sing Christopher Cross’s yacht-rock classic “Sailing” off-key while racing at high speeds. Combine a stupid story, shallow characters, and an absolutely predictable outcome, and you have this prime example of a Michael Bay movie experience. 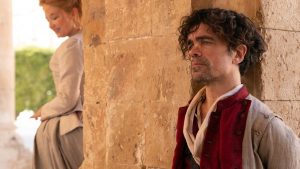 #4) “Cyrano” The story of Cyrano de Bergerac has been told and retold for more than a century, with most versions following the 1897 play by Edmond Rostand. This rendition is a musical, based on an Off-Broadway production Peter Dinklage starred in several years ago. As the others have, this one tells the tale of Cyrano, who pines for the beautiful Roxanne (Haley Bennett), but she’s attracted instead to another man named Christian (Kelvin Harrison Jr.). Understanding he won’t have anything more than a platonic relationship with her, Cyrano writes romantic verses for Christian to recite to Roxanne while Cyrano stands in the shadows. Unfortunately, “Cyrano” lacks the one basic element necessary to any musical: good songs. Worse, director Joe Wright’s cinematic indulgences get in the way of the storytelling. As for Dinklage, his singing voice is surprisingly good, as is his swordplay, and his charisma level remains considerable. He gives it his all, but it’s not enough to carry “Cyrano” out of the shallow end of the movie pool. You’d be better off finding Steve Martin’s “Roxanne” on a streaming service than sitting through two hours of “Cyrano.” 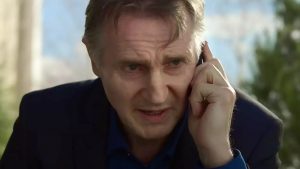 #5) “Memory” It has become nearly impossible to tell Liam Neeson’s action movies apart but, even at age 69, he keeps churning them out. His latest, “Memory,” is ostensibly about a hitman who’s beginning to suffer from dementia. For some reason, though, that whole memory loss plotline is subsumed by yet another run-of-the-mill revenge story, this time because Neeson has been ordered to kill a little girl, and that’s over the line for him. But the bad guys he works for don’t take no for an answer, so he becomes a marked man. And according to Movie Law #1,452, he must kill everyone in the chain of command that hired him for the hit. “Memory” gets so dense and villain-heavy that I actually forgot who is who, thanks to a cast full of nobodies playing characters spouting predictable, lousy dialogue. Meanwhile, Neeson looks exhausted in every scene, perhaps because he’s doing the same thing he’s done on screen umpteen times before. 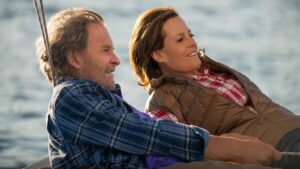 #6) “The Good House” From this photo of Sigourney Weaver and Kevin Kline leaning back on a sailboat with smiles on their faces, you’d think their new movie is a Nancy Meyers romcom about an older couple finding love again. You couldn’t be more wrong. In fact, that scene doesn’t appear anywhere in the body of the movie — it’s only part of an end credits sequence. Instead, “The Good House” is a drama about Hildy Good (Weaver), an alcoholic realtor in upscale Wendover, Massachusetts. Writer/directors Maya Forbes and Wallace Wolodarsky rely too heavily on flashbacks and Hildy’s fourth-wall-breaking commentary to fill giant holes in the storyline. Moreover, they have their characters repeatedly drop the word “wicked” into conversation to prove they’re from Massachusetts. Or maybe they’ve seen “Good Will Hunting” too many times. I’ve spent quite a bit of time around people from that region and never heard any of them utter the word “wicked” in a sentence even once. This is a movie that wants to say something serious about alcoholism, but whatever that message is gets lost because the writers are trying to fill every spot on a Hack Screenplay bingo card. Worse, they wasted the massive talents of both Weaver and Kline. 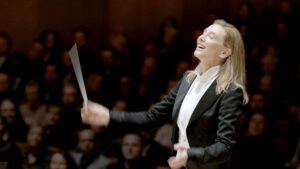 #7) “Tár” Lydia Tár is a rarity. She’s one of very few women who have become conductors of major orchestras — but it turns out, she shares some of the same predatory qualities as men who preceded her. In the first scene of “Tár,” she’s being interviewed at the New Yorker Festival by that magazine’s Adam Gopnik, and it’s clear she has reams of knowledge of classical music. Unfortunately, as a viewer, I felt like a college freshman who accidentally signed up for a graduate music theory course without having taken any of the prerequisites, so it was all over my head. Sadly, that feeling never abated while watching the movie. As Tár, Cate Blanchett uses every molecule of her massive talent and will likely get an Oscar nomination. She never looks like an actor pretending to be a conductor — she learned how to do the job, and pulls it off brilliantly. The same goes for her playing piano and speaking German. But I would have enjoyed “Tár” much more if director Todd Field had given us more scenes of her working with the orchestra and fewer of her fighting her inner demons while jogging through the streets of Berlin.

#8) “Armageddon Time” And the Oscar for Worst Casting goes to whoever chose Anthony Hopkins to play a Jewish grandfather. It’s almost as bad a choice as Neil Simon allowing Gene Saks to hire Blythe Danner as Jonathan Silverman’s mother in “Brighton Beach Memoirs” (not to mention Judith Ivey as his aunt!). ”Armageddon Time” is the coming-of-age story of Paul (Banks Repeta), who lives in Queens, New York, with his hand-wringing, PTA president mother (Anne Hathaway) and father (Jeremy Strong), a plumber with a temper problem. After a disciplinary issue, Paul is yanked out of the public school and sent off to the private academy his brother attends. On his first day in the world of mandatory blue blazers and ties, he meets a gruff older man in the hallway, who we later learn is a benefactor of the institution named Fred Trump (John Diehl). Yes, Donald’s father. This is the point at which I was pulled out of the fictional story and found my mind wandering to the evils that family has imposed on our country — for decades. Those feelings were heightened by the appearance later of Fred’s daughter, Maryanne, played by an uncredited Jessica Chastain. By including them in his movie, Gray pulls focus from Paul and Johnny, and I don’t think he ever got it back. As if that wasn’t bad enough, he wasted Tovah Feldshuh, who plays Paul’s grandmother, by giving her far too little to do opposite Hopkins and around the family dinner table. 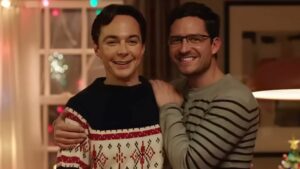 #9) “Spoiler Alert” I suppose with that title, I’m allowed to give things away in my review, especially when the movie itself does that in the very first scene, where we see a man in a hospital bed, clearly close to death. That man is Kit Cowan (Ben Aldridge), and his husband Michael Ausiello (Jim Parsons) is bedside, holding his hand as we flash back to when they first met and how their relationship evolved. Unfortunately, not only does “Spoiler Alert” not break any new ground, it also follows the beats of similar movies (e.g. “The Big Sick,” “Terms Of Endearment”) while offering nothing new about relationships or caring for loved ones. Parsons was obviously cast in the hopes his presence would bring in some “Big Bang Theory” fans, but he’s about 20 years too old to play Michael. Moreover, his timing seems a bit off, as if he’s struggling not to infect the goings-on with anything resembling Sheldon, the TV role he played for a dozen years. “Spoiler Alert” is a formulaic weeper that’s not worth your time. 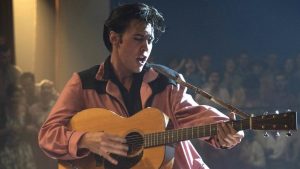 #10) “Elvis” I don’t want to say Baz Luhrmann’s biopic of Elvis Presley is over the top and overstuffed, but it’s about as bloated as The King was in his last years. The difference in this telling of his life story is that much of its focus is on the antagonist — Elvis’ manager, Col. Tom Parker (Tom Hanks), who narrates the movie. That gives Luhrmann an opportunity to showcase the many ways Parker abused his position, micromanaging Elvis’ career while stealing millions of dollars from him. In a fat suit and facial prosthetics which grow larger through the years, Hanks unfortunately adopts an odd accent as the Dutch-born Parker, which makes it quite difficult to understand a lot of what he says. That’s not a good attribute for a movie narrator. In fact, the overall sound design of “Elvis” is terrible, except in the musical sequences. Too often, dialogue gets muffled by ambient sound — and I don’t mean that in a good, Robert Altman sense. The only good thing in the movie is Austin Butler’s portrayal of Elvis, especially when he’s singing and gyrating. But it’s not enough for me to recommend the movie.