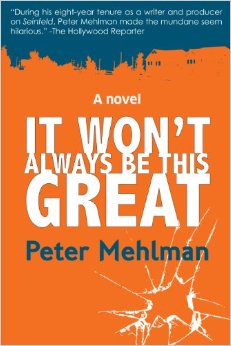 Here’s my conversation with Peter Mehlman, who was a writer and producer for “Seinfeld” and author of “It Won’t Always Be This Great.” We started talking about some of the viral phrases he created in his “Seinfeld” scripts — including “yada yada,” “double-dip,” and “shrinkage.” We also discussed the process of developing stories for the show, and how he and other writers got things approved by Jerry Seinfeld and Larry David, as well as how it changed when David left the show.

Then we were on to the book, a novel about a podiatrist whose impromptu act of vandalism changes his life, and the difference between writing for the screen vs. writing for print. And we got into some other projects Mehlman worked on, including Joe Buck’s short-lived HBO show, Howard Cosell’s “Sports Beat,” and a 1990s ABC sitcom I liked entitled “It’s Like, You Know.”