You Bet Your Leno 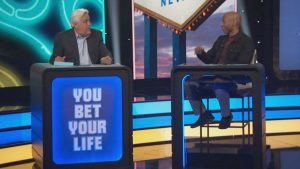 Jay Leno’s new version of “You Bet Your Life” is so bad it reminds me of another disaster he starred in 35 years ago — which his manager threw me out of. Here’s the story.

The overriding problem is that Leno has never been able to banter with guests, including during his entire run on “The Tonight Show.” His forte has always been standing in front of an audience and telling jokes. And he’s fine on his CNBC show, “Jay Leno’s Garage,” because he gets to talk about cars, his great love. But when he has to sit down and feign interest in someone else — celebrity or civilian — he falters mightily.

Unfortunately, that’s the format element that has always been the key to the success of “You Bet Your Life,” all the way back to its origins on radio (and later TV) with Groucho Marx as the star. Everyday people came in ostensibly to play a trivia game, but first they conversed with the host, who’d been given information about them by the show’s producers, and was adept enough at ad-libbing that he could elicit laughs from the conversation. In its original run with Groucho, the show thrived for 13 years, then many more in syndicated reruns.

“You Bet Your Life” has been revived twice before, with Buddy Hackett and Bill Cosby, but neither remake lasted more than a year. Why anyone thought a third attempt would yield success is beyond me.

On the new Leno version, it was obvious he wasn’t married to the show’s old format, because the first thing he did was a “Headlines” bit, with wacky news stories his writers clipped for him. It’s a bit that was a weekly mainstay of his “Tonight Show,” but has nothing to do with the game he’s now supposed to be hosting. Leno also brought along Kevin Eubanks, the former bandleader on “The Tonight Show,” to act as his straight man and sidekick, a role that Eubanks was never good at — other than repeatedly blurting out, “Oh, come on, man!” in response to some Leno absurdity.

The whole production was so lame it reminded me of an another long-forgotten Leno production that I was peripherally caught up in.

In October, 1986, NBC had Leno under contract and was desperate to find a project for him. The result was a 90-minute special shot in a warehouse under the Ben Franklin Bridge in Philadelphia.

At the time, I was a fan of Leno, particularly his appearances on “Late Night with David Letterman,” so I arranged a live phone interview with him to promote the event on my WIOQ radio morning show. During that conversation, Jay was funny and playful. When I asked some questions about the process of making the special, he said they would record the whole thing on both Thursday and Friday nights, then edit the best takes together for the final product. He invited my listeners to buy $10 tickets and come to the warehouse, with the proceeds going to a local charity. He also invited me to sit in the press section on Friday night. After he hung up, I bought ten pairs of tickets for the Thursday taping. I gave nine of them away, keeping a pair so my wife and I could go.

On Thursday night, it became apparent very quickly that making a TV show in such a cavernous space was a mistake. With multiple stages spread out, the crowd couldn’t see everything, and taping had to be stopped every time the crew had to move cameras and other equipment from one area to another. That screwed up the audience’s enthusiasm and reaction time — bad things for comedy. In addition to performing standup, Leno also introduced the show’s musical guest, a Philly band called The Hooters, who performed their medium-sized radio hit, “All You Zombies.” All of that was fine, but things fell apart when it came to the sketches.

As he proved in the movie “Collision Course,” in which he co-starred with Pat Morita, Jay Leno has never had any acting ability. That fact was never more clear than on that night in Philadelphia, when he had to play various characters in skits that laid one egg after another. There was also a running gag about the murder of David Letterman that was supposedly a take-off on the famous “Who Shot JR?” conundrum on “Dallas” that had the whole nation talking — in 1980. This was six years later, and the bit (which included Vanna White spelling out the killer’s name in letters on the “Wheel Of Fortune” set) absolutely bombed. At one point, as one skit ended and he walked backstage, Leno’s microphone was still on as we all heard him bemoaning how badly things were going.

In the audience, I was cringing and making mental notes about the disaster I witnessed. The next morning, Friday, I described it all on my radio show in great detail, saying the only parts of the show that worked were those that let Leno do the one thing he does best, standup comedy. I also questioned whether NBC would even let this horribly lame piece of television air as planned. But to be fair, I said, I would go back to the warehouse for the second taping, to see if the producers and writers had figured out how to save the production.

Friday evening, Martha and I showed up at the venue and were escorted to the press area, which was only about half-full. Ten minutes before the taping was scheduled to begin, Helen Kushnick appeared out of nowhere and started yelling. Kushnick was not only Leno’s manager, she was also an executive producer of the special. To say she was pissed off would be an extreme understatement, and I was her target.

She had either heard what I’d said that morning about the previous night’s taping, or had been told about it. She claimed I had no right to be there on Thursday when the press was only invited for Friday, despite the fact that I had bought those tickets on my own. Then she cranked up the volume a notch, as if unaware we were surrounded by hundreds of people expecting to be entertained by her client. Screaming now, she claimed that Brandon Tartikoff (then the head of NBC programming) had heard my show and was ready to cancel the whole project. Then she ordered a couple of security guys to throw me out of the building as she stormed off. I never got a chance to say a word. Stunned, I told the guards we’d leave on our own, which we did, shaking our heads in disbelief.

I’d been hired by WIOQ that summer because the previous morning guy’s ratings had been sliding for years. But I’d only been there two months, so it’s not like I’d suddenly become one of the most-listened-to personalities in town. Thus, it was highly unlikely that Tartikoff even knew who I was, let alone had randomly tuned in to my show that morning — from his office in Los Angeles, two decades before streaming audio was even a thing! Also, Kushnick’s tirade was now going to lead to me dedicating a segment of my Monday show to what had happened, once again shining a negative light on her and Leno.

Anyone who read Bill Carter’s book, “The Late Shift,” or saw the HBO movie based on it, would recognize that this was not atypical Kushnick behavior. In fact, it eventually led to her being pushed out as showrunner of Leno’s “Tonight Show” — and losing him as a client.

As for Leno’s special, it didn’t air until several weeks later, and probably only because the network was contractually obligated to do so. With virtually no advance promotion, NBC slipped it into the “Saturday Night Live” slot on a weekend that show was dark. It didn’t draw much of an audience, although several of my listeners who saw it called into my Monday morning show to talk about how much it stunk.

Leno, of course, rebounded from that catastrophe and regained NBC’s favor a few years later by filling in for Johnny Carson and eventually taking over as host of “The Tonight Show.” I doubt very much he’ll have similar success with “You Bet Your Life,” but I’m sure I won’t watch it again.

Because I don’t need the ghost of Helen Kushnick to appear and throw me out of my own living room.