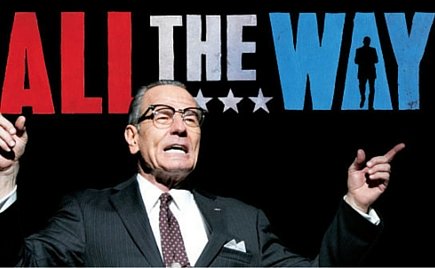 I saw Bryan Cranston as LBJ on “All The Way” on Broadway a couple of years ago and walked out astounded at his talent. Here’s what I wrote at the time:

Cranston plays Lyndon Johnson from shortly after he became president in November, 1963, until he was elected to his own full term in November, 1964. The centerpiece of that year was the Civil Rights Act, which Johnson cajoled through Congress. The political resistance came from within his own party, as the racist South (the so-called Dixiecrats like Dick Russell, Strom Thurmond, and Robert Byrd) lined up against him on one side while civil rights leaders (like Martin Luther King, Ralph Abernathy, and Stokely Carmichael) tugged from the other.

The actors portraying those men, as well as the women who play LadyBird Johnson and others, plus Michael McKean as J. Edgar Hoover, all give solid performances, but it is Cranston’s energy that drives the show. He’s on stage for virtually the entire three hours, and his LBJ is in constant motion, even when sitting down. It’s a powerful, densely verbose performance that must leave him drained nightly.

There were a couple of times where I thought I heard echoes of Walter White, another Cranston character who didn’t suffer fools gladly and used his wits to stay one step ahead of his opponents. Many in the audience were no doubt drawn to “All The Way” because they knew Cranston’s talents from his years on “Breaking Bad” — and wanted to see him play LBJ as The President Who Knocks. Whether it’s his celebrity or the 50th anniversary of the civil rights act that’s putting them in the seats, they end up with a helluva history lesson.

Now, that production has been turned into an HBO movie, which debuted Saturday night, and it’s even better. Opening up the story from the confines of the stage allows director Jay Roach — who also did the brilliant “Recount” and “Game Change” — to provide a bigger canvas for Cranston and his co-stars (Bradley Whitford, Frank Langella, Anthony Mackie, Melissa Leo, Stephen Root, Joe Morton), and they take full advantage of it.

While Johnson was rightly demonized for the Vietnam War — “All The Way” includes a couple of scenes about the Gulf Of Tonkin lie that escalated US involvement and led to tens of thousands of soldiers’ deaths — his legacy also has to include his Great Society agenda of medicare, the Peace Corps, the immigration act, the national endowment for arts and humanities, and especially the Civil Rights Act of 1964 and the Voting Rights Act of 1965.

Ironically, his successes came at a cost, as the Democrats lost the racist south due to the latter two pieces of legislation. I’d bet that many viewers who don’t know their history will be surprised to see that it was Dems who were the segregationists of that era. Today, those former Dixiecrats make up most of the Republican base. They’re probably also shocked to see that a Democrat president was able to cajole GOP members of Congress to join him in getting things done.

As it did on the Broadway stage, the television version of “All The Way” serves as an important history lesson and a terrific piece of entertainment. If you missed it this weekend, look for it all month on HBO.