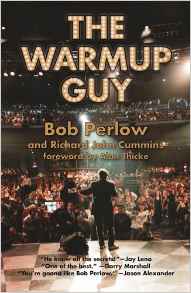 What do “Laverne and Shirley,” “Mork and Mindy,” “Taxi,” “Cheers,” “Newhart,” “Night Court,” “Home Improvement,” and “Friends” have in common? Yes, they were all sitcoms, but they also all had Bob Perlow as their audience warmup guy. He’s written about his career in the TV comedy bleachers in a new book, “The Warmup Guy,” and when he joined me to talk about it, I asked him: