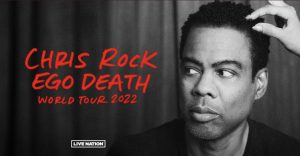 “I’m fine. My hearing is back, and my fillings have been replaced.”

That’s how Chris Rock opened his 100-minute show Saturday night at the Stifel Theatre in St. Louis. He knew everyone in the room would want to hear him discuss the slap in the face he took from Will Smith at the Oscars earlier this year, but he obviously didn’t want to go very deep on the subject. In fact, he never even mentioned Smith’s name, and kept Jada’s name out of his mouth, too.

With that aside, we were off an another rollicking ride with Rock as he discussed dating as a divorced middle-aged man, how his children consider themselves rich while he identifies as poor, and some political material about Donald Trump and Hillary Clinton. It was all fresh and funny, with that trademark Rock delivery, which often involves repeating the same phrase two or three times for emphasis or to set up another punchline on a topic. He’s a master at it, and my wife and I were glad to be there.

What we didn’t like was the large number of people who could not remain seated throughout the performance. The problem affects us directly because I always get aisle seats, guaranteeing me a bit more leg room and avoiding the claustrophobia that gnaws at me if I sit in the middle of a row. But being on the aisle means having to get up every time someone wants to leave or enter. In fact, I don’t even sit down before the show until everyone in my row is there or the lights go down.

Saturday night, I had to get up at least a half-dozen times. Where was everyone going? To the bathroom, because they can’t hold it in for two hours — especially the 16-ounce beers they bought in the lobby and drank in their seats. They usually returned with other beverages that refilled their bladders and started the process all over again.

If it takes ten minutes to get from your seat to the bathroom and back, you’re missing 10% of Rock’s show (it’s not like the audio is pumped into the stalls). And those tickets weren’t cheap! Why not forego the Bud Light and get more Chris Rock for your money?

The time to go was during the opening act, some comedian I’ve never heard of, who came out and did crowd work, talking to and insulting people — mostly the front row — for about ten minutes. Then he left the stage without introducing anyone, followed by several minutes before the lights finally went down and Rock strolled out on stage.

I don’t know why really successful comedians, the ones who can do an hour and a half on their own, feel the need to have someone “warm up” the room. This guy didn’t do that, and even if he had, the delay between his exit and Rock’s entrance would have negated it. We see Paula Poundstone every time she comes to town, and she never has an opening act. She just strolls out, starts talking, and has us on her side instantly.

The same would be true of Rock. After all, he’s the one we came to see. It’s his name on the posters and the marquee, not “Some Guy You’ve Never Heard Of But Once Appeared On A Comedy Central Show You Didn’t Watch.”

As soon as Rock said thank you and good night — before he even took his first bow — the crowd practically bolted for the exits in a way I’ve never seen before. Maybe they were all going through Severe Phone Withdrawal, a syndrome that must kick in whenever concert attendees are forced to lock up their phones in Yondr pouches on the way in, as we did Saturday night. I didn’t mind it at all, since not allowing anyone to have phones in the theater meant I wouldn’t be annoyed by people in front of me holding theirs up to take photos and videos, and the process only slowed our entrance and exit by about two minutes.

But I guess a lot of my fellow audience members got super jittery wondering if they’d missed out on a vital Instagram post, so they had to get to the lobby as quickly as possible to get their pouches unlocked. Or maybe they weren’t just heading for the exits, but for the bathrooms because of that second beer.