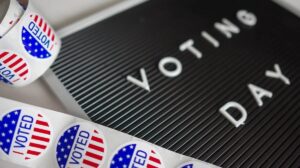 Well, the day we’ve all been waiting for is here — the one where we say goodbye to all the campaign ads that have been clogging every available commercial slot on television, radio, and even YouTube for the last few months.

Of course, it could also be the day we say goodbye to American democracy, although that will likely be delayed a bit. Not because our fellow citizens have returned to rationality, but due to the counting of the ballots — and the lawsuits that accompany them — which won’t be settled until later this week. Or month. Or year.

This will also be the first time I’ll be able to vote in a building other than a church. Our local government has decided that its residents may now vote at any polling place in the county. We’re planning to do so in the elementary school our daughter attended. If it were up to me, those would all be schools, not churches or other religious institutions. Elections should always be held in a secular setting — the literal separation of church and state. This is close to fulfilling one of the suggestions I made many years ago about how to make voting much, much easier.

One of the items my wife and I will vote in favor of today is Missouri Amendment 3, the Marijuana Legalization Initiative. I haven’t smoked weed since Halloween 1978, and have no plans to do so — or consume gummies or other edibles. But as all the fear mongering about pot has been proven false in the states where it’s been legal for years, it’s time for Missouri to join them. My only trepidation is that it means I’ll have to smell that disgusting skunk weed more often. I’ve been exposed to it on the sidewalks of Las Vegas, Los Angeles, and elsewhere, and find it as off-putting as tobacco smoke. Frankly, I don’t know how marijuana consumers can be around that stench, let along inhale it, or why the growers who create new strains through genetic modification haven’t come up with something that’s more pleasantly fragrant.

However, I’ll happily put up with that stink on occasion if it means those who have been arrested and convicted of marijuana-related non-violent offenses can petition for release from incarceration or parole and probation and have their records expunged, as Amendment 3 stipulates. That’s happened far too often for far too long to low-level offenders — particularly People Of Color — who have been tossed in the slammer just for having a single joint in their pocket.

The legalized weed issue got on the ballot because enough of us signed petitions (which I wrote about here), forcing the state to put it to a vote. While I’ll give it a thumbs up, I’m going to give a thumbs down to the other state amendments put in play not by the public, but the overwhelmingly Republican Missouri legislature. All of those ballot issues are power grabs that will do nothing to make our world better.

But I will be voting in favor of Proposition S, a no-tax-increase bond issue that will permit our the Parkway School District to borrow enough funds to repair many of its aging buildings. Frankly, I’d vote yes even if it meant raising taxes, because every dollar spent on teachers, students, and educational facilities makes our communities better.

In my talk radio days, each time I espoused that opinion, a caller would challenge me by saying, “I don’t have kids in public schools, so why should I fund them with my property taxes?” My answer was always that there’s a direct correlation between good, well-funded schools and the value of houses in the neighborhoods that have them. Those callers’ arguments were as specious as saying they don’t want to help fund airports or underwrite road repair because they never fly or drive anywhere. Fine, then you can’t buy any of the goods that are delivered across this country by airplanes and trucks, you selfish putz!

All of that said, I have no predictions about the outcome of today’s elections, but I guarantee you can find plenty of pundits offering polls and prognostications to support whatever you believe will happen. Let’s see how many of them will get it wrong but never admit it, because they’re not in the accountability business (like too many politicians).

The one thing you can be sure of is that the claims about rigged elections will be true — but not in the way Trump and his acolytes mean it. They live in a fantasy world consumed by conspiracy theories and The Big Lie. There has never been any evidence of widespread voter fraud or mishandling of elections by local officials. Meanwhile, GOP elected officials have only increased the use of gerrymandering, voter suppression, and armed “monitors” outside polling places to intimidate voters. Yes, the fix is in, and democracy is quite literally on the ballot.

It’s for that reason I can’t understand how anyone can be an independent voter at this point in our nation’s history. The differences between the parties and the candidates couldn’t be clearer, so how can undecideds not pick a side?