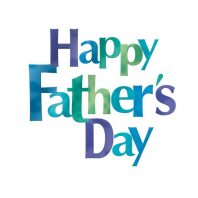 Father’s Day. A day to be proud to be a father, and to remember our own Dads. And to realize that, contrary to what we always believed would happen, there’s a part of us that is turning into a part of him.

Every man who has kids has gone through this. One day, you’re the son, hearing your father saying, “As long as you live in my house, you’ll live by my rules.” The next day you’re grown up with a kid of your own, and you suddenly hear that same voice saying that same phrase – only now it’s in your house, and it’s coming out of your head! You realize that, horror of horrors, you’re channeling your own father!

I asked the listeners of my show to contribute some of their favorite Dad Sayings. It’s amazing how universal they are.

“Don’t make me turn this car around!” Great threat, Dad. We’re 200 miles from home and I’m sure my brother and I will be peaceful and cooperative all the way back. Alternate version: “Don’t make me stop this car,” which is the title of a memoir by Al Roker of NBC’s “Today Show.” Yeah, go ahead, Dad, pull over and stop the car. That will get us there faster.

“This is not a restaurant, you’ll eat what’s on the table.” Lots of these sayings have to do with food, because dinner table battles are not generation-proof. Nowhere in America has any kid ever eaten brussels sprouts warm, but millions of us have sat there after everything else was cleared away, looking at those ugly orbs of yuck that we either had to swallow or look at for the rest of our lives. Alternate version: “You don’t have to like it, you just have to eat it.”

“Don’t leave food on your plate. There are children starving in China (or India, or the third world nation of your choice).” Dad, can you explain to me again how my eating this liver will help them? Logically, shouldn’t I purposely leave some leftovers, which you and Mom can box up and send overseas through some United Nations program? We could use those same boxes they give us at the Chinese restaurant, where I noticed that you didn’t finish everything on your plate!

“Just think of the broccoli as little trees.” I love broccoli now, as an adult, and can’t understand why my daughter won’t try it, even though it was always a fight to get me to eat it as a kid. My Dad actually used this tree analogy on me, and to this day I don’t get it. What made him think that I was ever in the mood to chomp down on a tiny tree to begin with? Climb a tree, plant a tree, chop down a tree, carve my initials into a tree — these I was interested in, but not eating one. What’s for dinner tomorrow night, bonsai bushes?

Also from the world of botany, “Money doesn’t grow on trees, you know.” Of course not, Dad. It grows on broccoli!

“This family is not a democracy.” We knew this all too well. When something of vital importance came up, there was only one vote that mattered, and it was Mom’s. Which explains why Dad was always saying, “What did your mother say? If it’s all right with Mom, then it’s all right with me.” Usual kid response, delivered in overly dramatic whine as if the world will end if you don’t get what you want: “But Dad, I really want it!” Usual parental reply: “Well, people in hell want ice water.” Go ahead, think up a rebuttal for that one.

“Life is not fair.” A lesson that Dad learned all too well through his many years toiling away in the workplace. This may have been the most important concept ever passed on from one generation of workers to the next.

“This is going to hurt me a lot more than it’s going to hurt you.” Dad as disciplinarian. Afterwards, the big difference between us was that he was able to sit down comfortably.

“You’ll understand why I’m doing this when you grow up and have kids of your own.” One listener says her father told her that she might not understand all of his jokes while she was a little girl, but when she grew up to be 65 years old, she’d get them all. She grew up expecting that, on her 65th birthday, she’d wake up laughing hysterically as all those jokes finally made sense to her. That is, until I pointed out that her father probably was a long way from 65 himself when he told her that.

“Don’t stand in front of the television – you’re not made of glass, you know!” Alternate version: “You make a better door than a window.”

“Close that door! We’re not paying to air condition the outside!” Dads have a great temperature sense, and it wasn’t confined to the front door, either. “Close the refrigerator door! You’ll attract penguins!” I always loved that one.

“If (your friend) jumped off the (highest local structure), would you jump, too?” This one has faded in recent years as that whole bungee-jumping fad got popular.

If you don’t understand any of this, you will someday when you’re a parent. In the meantime, go ask your mother.