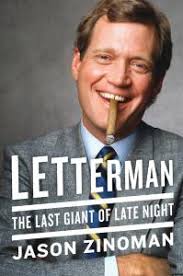 Here’s my conversation with Jason Zinoman about his book, “Letterman: The Last Giant Of Late Night.” Among the topics we discussed: