“Jeopardy!” Then Vs. Now 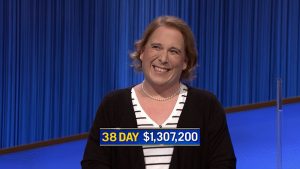 Emily Jahr has a piece in the Washington Post about people who were champions on “Jeopardy!” in the era when you were only allowed to stay on the show for a maximum of five days. She asked them how jealous they are of players like Amy Schneider, the current champ who, on Friday, tied Matt Amodio on the consecutive games list with 38 (Ken Jennings, who’s doing a great job as interim host, remains the GOAT, with 74 straight appearances).

Naturally, most of the earlier champs say they wonder how much longer they could have played if the five-day rule hadn’t existed when they were on the show, but few of them seem bitter about it. Rules change over time for all games. Since Roger Maris, baseball stars who play 162 games a season have beaten records put up by those who only played 154. NFL records fell this year when the league expanded the season from 16 games to 17, but they still count, just like those from the period in which the number was 12.

There’s a lot of stamina required for stringing so many victories together. The best analogy for winning as many games as Ken, Amy, and Matt might be the Main Event of the World Series Of Poker, in that you have to be at your mental best for nearly 12 hours a day, then go get whatever sleep you can before coming back to do it again the next day. Even though each “Jeopardy!” episode is 30 minutes long, they tape five a day and, with all the re-takes, meal breaks, and clothing changes (for the host and champion), the recording session can drag on for nearly that long. Especially last year, when the guest hosts weren’t as smooth as the late Alex Trebek, and many bits and pieces had to be re-done and/or edited significantly.

Amy’s 38 in a row means she’s spent almost eight of those long days at the Jeopardy studio. To win the WSOP Main Event, you have to play and survive nine sessions. In both cases, a single brain fart at the wrong time could mean you’re out of the competition. In poker, that could mean taking a bad beat on a hand you seemingly had locked up. On “Jeopardy!” another player could go on a run, buzzing in before you, then selecting a Daily Double and answering it correctly, denying you the opportunity to do the same. That’s what eventually happened to Matt, Ken, and everyone else who’s put together a long run. It’ll happen to Amy, too. Someday.

There are some online whiners who complain these long champion runs make watching “Jeopardy!” boring and are bad for the game. I couldn’t disagree more — and not just because my mother was on the show for four days in 1967 (I wrote about that here).

Seeing history being made by whoever is perched at the first contestant podium is just part of the fun. We’re enjoying seeing Amy — like the guys before her — run up the scores and showcase a remarkably broad knowledge base. My wife and I watch regardless of who the players are because we love the challenge of trying to play along.

That’s not diminished one bit by a great returning champion, a category Amy certainly belongs in.