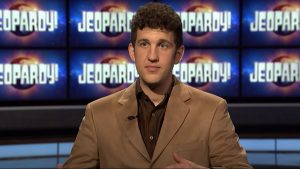 When James Holzhauer finally lost on “Jeopardy!” after winning 32 games in 2019, I heard from several people that it was “obvious” he had tanked the game on purpose. Those claims — like all wacky conspiracy theories — were based on exactly zero evidence, and often preceded by “I read somewhere that….” They had no explanation for why someone making tens of thousands of dollars per episode would suddenly want to stop, but the falsehoods ran rampant nonetheless.

So, I wasn’t surprised when Matt Amodio’s winning streak on “Jeopardy!” ended at 38 games and the same theories popped up again. But, as he writes in a piece for Newsweek:

I wasn’t being fed the answers when I was winning and I didn’t throw the game when I lost. It’s just a competition, I was doing well and then I lost. There’s nothing more to it. My buzzer was working fine. The only thing that wasn’t working was my brain at full capacity. The theories don’t upset me, people think all sorts of crazy things. But I do have the power not to acknowledge them.

It’s the mental aspect that some people don’t take into consideration. It’s draining to be under that kind of pressure, and it does have an effect on performance. Amodio explains:

The day I lost, I went in feeling a little “off” physically, but I had felt worse before and then won with no problem, so I didn’t think anything of it. Then, I gradually saw that I wasn’t remembering things that I really should have been able to remember, and I was mis-reading clues in front of me. As that was happening, I began to see where the path ahead of me was leading. I’m quite pleased with how I kept steady throughout. I don’t think my emotions or confidence played that much into it, what I did feel was that there was evidence that my mind wasn’t working at full capacity.

I can relate. In my decades of hosting live radio shows, there were many times when I struggled to find the right word, phrase, or fact. Most of the time, I knew immediately the reason was that I hadn’t gotten enough sleep — particularly in the 15 years when I worked in the morning. In that era, I lived on the east coast, so if I stayed up to watch the Monday Night Football game, which could easily run past 11:30pm, I might only get a few hours of sleep before my alarm went off at 4:00am. It would often take my brain some time to get into gear, and there were days when it never got up to full speed. I don’t think anyone listening could tell, but I knew.

As I sit here typing this on my laptop, it doesn’t matter if I pause for 5 or 10 seconds while I struggle to come up with the right way to say something. But in a live radio setting, that’s too much dead air. If you’re on a TV game show where timing is crucial, any hesitation in buzzing in or coming up with a response can mean the difference between winning and losing. For whatever reason, that’s exactly what Amodio suffered from on the day he lost. In those split-seconds when his brain wasn’t working at its peak level, all it took was for another contestant whose gears were grinding more smoothly to jump in and win.

The expression, “If you snooze, you lose,” would seem to apply at times like those. But maybe if you had snoozed enough the night before, you would have put yourself in a better position to triumph. Or maybe you shouldn’t have had that bean burrito before taking an exam. Or maybe it wasn’t a good idea to have a two-martini lunch before you had to give a big sales presentation.

I’m not singling Amodio out here. As I said, I’ve been in that position many times myself. Everyone is expected to perform at the top of their talent every time. But even the best have off days.