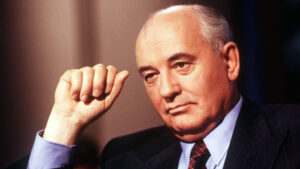 The death at 91 of Mikhail Gorbachev last week had me thinking of the time in 1989 I broadcast my morning radio show from Moscow back to the US. It happened just a few months before the Iron Curtain dissolved, the Berlin Wall came down, and the Cold War ceased.

And it wouldn’t have happened without Gorbachev.

Through his policies of glasnost (openness) and perestroika (reconstruction), Gorbachev had changed the Soviet Union from a secretive society in which its citizens struggled daily to a nation newly open to trade with the west. He signed a pact with the US on limiting nuclear arms, uprooted the corrupt bureaucracy that had stifled progress for so long, and chipped away at some of his country’s image as The Evil Empire.

Ultimately, he wasn’t successful, as communist hardliners eventually reversed his gains, making way for Vladimir Putin to rule with an iron fist. But Gorbachev became the first Soviet leader with large groups of admirers around the world, particularly in the United States.

When he visited DC for a summit with Ronald Reagan in December, 1987, the locals lined the sidewalks of Pennsylvania Avenue as the Soviet leader’s motorcade passed. Then, in a PR stunt right out of Reagan’s playbook, Gorbachev told his driver to stop, got out of his limo, and walked over to the curb to greet his American fans. His KGB security team wasn’t used to this and looked very nervous, but the Secret Service agents on the scene made sure nothing went awry. After maybe 10 minutes, Gorbachev got back in the car and continued on his way.

The next morning, when I brought up this extraordinary event, several loyal listeners who had been there called to give their first-person perspectives, including one who had managed to shake Gorbachev’s hand. She told me he’d kept saying, “Hello! Nice to meet you!” as he moved along the barricades on the side of the street, and looked like he was genuinely happy to get such an enthusiastic response — something he didn’t receive at home.

By the time I got to Moscow 18 months later with my broadcast team, American businesses were just opening franchises in the city. As I recall, the first was Baskin-Robbins, which had to have its product flown in from western Europe because the company couldn’t find ingredients of high enough quality in Russia. You’d think that such an enterprise would have a long line of Muscovites waiting to get in, but the truth was that the local citizenry didn’t have discretionary funds to spend on things like ice cream. They had enough trouble getting shoes and toilet paper — a situation that didn’t improve much under Gorbachev. The store struggled so much at first that it was only open 2-3 days a week.

Still, I was very aware that my presence in that city — and the opportunity to broadcast completely free of government censorship — was a rarity that could only have occurred under Gorbachev’s leadership. I only wish he’d given us something to drink at dinner other than room temperature wheat soda.

Click here to read about my exploits in Moscow during that trip, including stories about juice machines, big boulevards with few cars, and how a colleague helped me overcome my out-of-character nervousness before our first show.