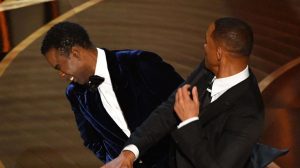 There was a point in last night’s Oscars telecast when the headline would have read: “Deaf Man And Openly Queer Woman Win Oscars For First Time!” But those accomplishments were overshadowed by Will Smith’s toxic masculinity.

What was so odd about him going on stage to smack Chris Rock and then curse at him was that, immediately after Rock made the “GI Jane 2” joke about Jada Pinkett’s Smith’s nearly hairless head, Smith was caught on camera laughing out loud. But then he must have looked at his wife as she gave him one of those looks that tells any husband, “Don’t be laughing at me!”

That’s when Smith got violent, to the shock of everyone in the Dolby Theater — and watching on TV. Upon returning to his seat, as Rock tried to put some air back in the room, Smith yelled at him (twice), “Keep my wife’s name outta your fucking mouth!” You didn’t hear that in the US, but they did in Japan and Australia, where the audio wasn’t censored, and it took only about 3 minutes for clips from both countries to show up on YouTube and Twitter.

Speaking of the latter, that’s where my friend Jon Grayson tweeted, “If you respond to words with fists you are not a protector, you are not a family man, and you are not a hero. You are a sad, pathetic, violent little child who just set a miserable example for your own children.” Jon is a talk radio host who (like me for 40 years) is always looking for things to talk about on the air, because the medium requires so much content to fill so many hours. So, when something like the Rock/Smith confrontation took place, it’s free content to exploit. I bet Rock is happy, too, since he’s doing a standup tour and just got something to talk about dropped in his lap. Or on his cheek, anyway.

But I guarantee he won’t keep Jada’s name out of his mouth.

What made the whole thing even odder is that Smith’s public persona for decades has been of a good actor, fun guy to be around, and money-in-the-bank talk show guest. But he will no longer be associated with good feelings. And he didn’t help himself with the bad, pompous speech — about love! — he rambled through after winning Best Actor for “King Richard.” I bet he got even more hell from Jada later at home when she watched the clip and saw that his first reaction to Rock’s line was to chuckle.

Afterward, the Oscars publicists tried to tamp down the controversy by releasing a statement that started with, “The Academy does not condone violence of any form.” To which former Chicago Tribune columnist Phil Rosenthal tweeted: “Must be imagining there were loving tributes to the Godfather trilogy, James Bond films, and Pulp Fiction on the Academy Awards show I just saw.”

Speaking of Bond, the Oscars showrunners had three extreme sports guys introduce a montage celebrating the franchise’s 60th anniversary. What, you couldn’t get any former Bonds to show up? Last time I checked, Daniel Craig, Timothy Dalton, and Pierce Brosnan were still alive. And if you couldn’t get them, how about former Bond Women like Leá Seydoux, Rosamund Pike, and Halle Berry (maybe she’s too busy with those inane JB Smoove sports betting ads)? Did you try Judi Dench (M), John Cleese (Q), and Naomie Harris (Moneypenny)? How the hell did you end up with Shaun White?

I was glad to see three wins for “CODA” — which I named one of the best movies of 2021 in my year-end list — but I wondered what might happen if Troy Kotsur went too long with his acceptance speech for Best Supporting Actor. After all, it’s not like he’d hear the orchestra playing him off.

Speaking of the orchestra, why weren’t they providing the music throughout the whole show? How’d you like to be one of those talented musicians and have to sit around while some DJ no one’s ever heard of spins recorded tunes from a booth in the mezzanine?

The tribute to the 50th anniversary of “The Godfather” would have been better off with just a montage of the most famous lines from the movies. While it was nice to hear from Francis Ford Coppola, couldn’t someone have written something for Al Pacino and Robert DeNiro to do besides stand there?

Speaking of shoving old actors on stage, I couldn’t help but grimace at Liza Minnelli, who was rolled out in a wheelchair for the 50th anniversary of “Cabaret” and to give out the Best Picture award. I don’t know what kind of health issues she’s battling, but it was almost as painful as watching Kirk Douglas ramble incoherently through his last time as an Oscars presenter. Fortunately, Lady Gaga was there to save the moment with Minnelli, repeatedly telling her, “Don’t worry, I got you.” What a total pro.

There are always complaints about who’s been left out of the In Memoriam segment, but I was confused about why someone was included. It was fine to have Bill Murray speak on behalf of Ivan Reitman and Tyler Perry do the same for Sidney Poitier, but Jamie Lee Curtis for Betty White? Throughout her long, glorious career, White was always known as a giant star on the small screen, not the big one. So why was she singled out on a movies award show?

Speaking of the In Memoriam segment, why does director Glenn Weiss always give so much camera time to whoever’s performing the songs during the Dead People Montage? There’s no need for a live performance of any kind, and certainly not at the cost of cutting away from the slides showing those you’re honoring. Worse, last night’s performers were a gospel group doing upbeat songs about heaven, including Norman Greenbaum’s “Spirit In The Sky.” Bad, bad choices by the producers, who should watch what TCM does at the end of each year in this regard and then copy that.

As for the three hosts, they were fine, although one of them (and the writing team, which is usually huddled backstage during the show) needed to step up and return the telecast to reality after the Will Smith moment. As for the extra bits beyond their opening: Amy Schumer’s monologue was sharp and funny, Wanda Sykes’ visit to Academy Museum was only mildly amusing, but Regina Hall’s single guy COVID test bit laid a big egg. Why would she agree to play a horny hot mess? And would anyone have thought it was a good idea if this had been a male host calling women up to the stage?

I was happy to see “Summer Of Soul” — which I raved about and named the Best Documentary Of 2021 — take home the Oscar in that category.

Lastly, that whole controversy about saving a few minutes by giving away some awards before the full show aired, then playing back edited versions during the telecast, didn’t do much in cutting down the total running time, which I think ran about 3:40. Not only that, it meant the losers in those categories — assuming they stayed seated — had to go through their ego-deflating moments twice.

But at least they weren’t smacked around on live TV by Will Smith.