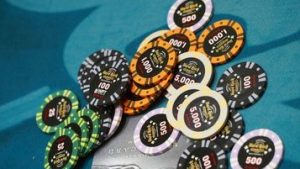 I played poker in a casino for the first time in a while the other night and encountered one of my pet peeves: a player who made large bets by picking up a bunch of chips, arranging them in a stack behind his cards, then dropping them past the betting line into a messy pile, forcing the dealer to reach over and re-stack them. Every time.

Why not leave them in the stack? Why the compulsion to scatter them? Why waste everyone’s time, particularly in games where players have to pay a fee every half-hour just to stay in their seats?

I was tempted to say something to this guy, but he was losing, which made him play worse, and I didn’t want to do anything to cause him to leave the table. Unfortunately, none of those chips ended up in front of me — which may be why I was more peeved than usual.