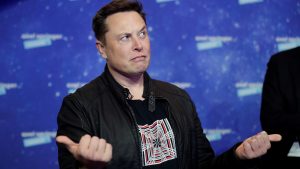 Now that it looks as though Elon Musk will go through with his plan to buy Twitter, it’s a good time to re-read the piece I wrote in April about what would lead me to leave that platform. I’m still in wait-and-see mode, but that could change — especially if he reverses the ban on Donald Trump and his acolytes, which could have a negative impact on the midterm elections next month.

A couple of weeks ago, I hoped Apple TV would release Antoine Fuqua’s “Emancipation,” starring Will Smith, before the end of 2022, rather than pushing it off to next year over fears the potential audience is still in shock over Smith slapping Chris Rock at the Oscars. Monday, Apple released the trailer and announced the movie would open in theaters December 2nd and then a week later on the streaming channel. I’m looking forward to seeing it.

And finally: I saw a sign on a highway this week that said, “End Wet Paint,” and my first thought was, “Wait, has Sherwin-Williams been canceled?”