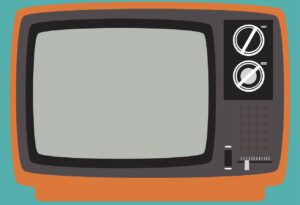 Nearly forty years ago, while doing the morning show at WHCN/Hartford, I invented a listener-participation game in which callers asked TV trivia questions which my newsman/partner Gary Lee Horn and I would try to answer. I called it “Stump Mr. Video.”

I didn’t give away any prizes, nor were the calls screened. We took them live and we were pleasantly surprised how quickly the participants got into a fun groove with us. Often, when we or a caller got a detail wrong, someone else would correct us or fill in a hole in our knowledge.

Or, during a commercial break, I could page through a reference book I kept in the studio, “The Complete Directory To Prime Time TV Shows 1946-Present,” compiled by Tim Brooks and Earle Marsh. It was over 1,000 pages long, a remarkable compendium of information. In fact, it was so large, there was no way to look something up quickly enough while on the air. I still have that edition on my bookshelf, though I probably haven’t opened in a couple of decades.

This was long before the world wide web, so we couldn’t access IMDb or Wikipedia, which didn’t yet exist. As two guys who had watched far too much TV growing up in the sixties and seventies, we either had the information stuck in our heads somewhere, or might be able to figure it out.

Among the frequent questions I remember:

Stump Mr. Video became so popular we used it as a weekly recurring bit and the phone lines went wild. Listeners would come up to us at personal appearances and hit us with questions. Our production director, Tom Watts, even edited together some lyrics from rock songs that mentioned television, including “Watching TV” by Charlie and “I’m The Slime Oozing Out Of Your TV Set” by Frank Zappa.

It helped that, in the early 1980s, there were only a few television channels, since cable was in its nascent period and no one had even conceived of streaming. With the fire hose of content being released in 2022, there’s no way we could play Stump Mr. Video today. Besides, there are fewer and fewer shows that attract large enough viewership to reach the levels of popularity and common viewership of that era.

Also, home video recorders weren’t popular yet. Although Gary owned a Betamax machine, I didn’t get a VHS recorder until a few years later. Thus, if you missed something on TV last night, you might never get a chance to see it. Today, you’d find the clips on YouTube and recaps on multiple websites, but in those days it was awkward to go into work and find everyone buzzing about the “Who Shot JR?” episode of “Dallas” and not be able to join in the water cooler conversation. That’s why I always included a caveat: the questions had to be about a primetime show most people had heard of, and couldn’t fall into the realm of minutia (details no one could be expected to know).

I created Stump Mr. Video purely to entertain and engage listeners. Even those who never called in could still play along — and maybe I got them to keep listening for just a few minutes more.