Thanks For Everything, Carl 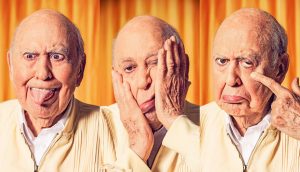 I’m saddened to hear of the death of comedy legend Carl Reiner, who was a guest on my radio show more times than almost anyone else. In addition to his accomplishments in television and movies — which I’ll get to — Carl was a natural storyteller, which is why he was always a money-in-the-bank guest. In all the years I knew him, he never failed to make me laugh, but it was clear he had a passion for people.

Twenty-six years ago, when I was doing morning radio in Washington, DC, Carl was in town for a book signing. He called into my show and, at the end of the conversation, he told me to meet him at lunchtime at the bookstore, where we’d have a few minutes to chat off the air after he had scribbled his name in books for his many fans. I did as he requested and brought along Martha, then very pregnant. He gave her a big hug and insisted I take a picture of her sitting on his lap. Then he picked up a copy of the book he was promoting (a novel called “All Kinds Of Love”) and — remembering that we had earlier that day discussed his working with Steve Martin on “The Jerk,” “Dead Men Don’t Wear Plaid,” “All Of Me,” and “The Man With Two Brains” — he signed the book for me with a line I’d told him I loved from the latter film: “Into the mud, scum queen!” As he handed it to me, he said, “Lots of people will have my autograph in the book, but you, Paul, will be the only one with that line of dialogue!”

Over the years, Carl shared lots of anecdotes about the landmark sitcom he created, “The Dick Van Dyke Show,” including the classic “Walnuts” episode, why he hired Morey Amsterdam, why the Petries slept in twin beds, and how the show was almost canceled after its first season. We discussed his 70-year friendship with Mel Brooks, his relationship with Johnny Carson, and what it was like to direct George Burns in “Oh, God!” I asked him about his role in the “Ocean’s Eleven” movies, as well as “The Russians Are Coming, The Russians Are Coming” and “It’s A Mad, Mad, Mad, Mad, World.” I doubt there’s any aspect of his career we didn’t touch on at some point.

Carl was also a political junkie who, over the last three years, rarely went a day without tweeting about some horrible thing Donald Trump did as president. Unlike the Liar-In-Chief, Carl believed in the power of government to do good things for Americans. He knew about it firsthand, once telling me how he got an early boost from government programs under FDR. It’s too bad he won’t be around to see Joe Biden take the oath of office.

Carl kept working right into his nineties, making TV appearances and writing. He had a steel-trap mind and could recall details of all sorts of places he’d been and things he’d done. He committed those to paper in several books he published during his last decade, and I was always glad when he returned to my show to promote them.

Carl Reiner was a true mensch who had a hell of a life and made tens of millions of people happy. I can’t shed a tear for his loss because just the thought of him brings a smile to my face.

Thanks for everything, Carl.