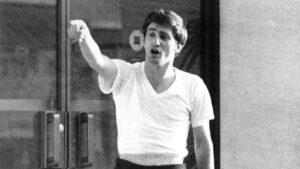 Yesterday, I put “Dog Day Afternoon” at the top of my list of the greatest bank heist movies ever. To mark the 50th anniversary of the event it was based on, Daniel Edward Rosen has written a terrific piece with amazing details about the actual robbery, the two guys who tried to pull if off (John Wojtowicz and Sal Naturale), and the FBI agent who ended the matter with a single bullet.

The police had cut off both the telephone lines and the air conditioning. Wojtowicz and Naturale were now overheated and hungry. Sure, the two men now had over $38,000 in cash and nearly $175,000 worth of traveler’s checks in their possession. But with that had come eight restless hostages and unrelenting, unflattering media coverage. They were trapped inside a bank, surrounded by a battalion of law enforcement and spectators who wanted to see things escalate to an explosive finale. (On two occasions, Wojtowicz fired his gun, once toward the rear of the bank upon hearing a “menacing” noise, another when he accidentally discharged his rifle after bumping it into a desk, nearly blowing off a foot.) What Wojtowicz didn’t have was…a clear escape plan.

After hours of negotiations, Baker and Wojtowicz reached an agreement. The two robbers would be taken with their hostages to JFK, where a plane would fly them to multiple destinations. At each stop, two hostages would be released, and when all the hostages were off the plane, Wojtowicz and Naturale would continue on to freedom, wherever that might be. Inside the bank, the robbers and their hostages brainstormed ideas on where they’d go — maybe Moscow, maybe Tel Aviv.

But how would the two robbers and their hostages get to the airport? There was talk of taking separate cars, one robber and a few hostages per car, to JFK. Ultimately, it was agreed that they would be transported in an airport limousine, with a sole FBI agent, who would be at the wheel. Baker presented four agents to Wojtowicz, having them stand in a line in front of the bank. Among the four were Thomas Sheer, a former Marine who would go on to serve as assistant director of the FBI from 1986 to 1987, and Jack Jansen, who stood over six feet and was built like a boulder. Wojtowicz looked them over and pointed at the least physically imposing of the four. “I’ll take him,” he said — meaning Murphy.

Rosen’s piece is as gripping as Lumet’s movie. You can read the whole thing here.