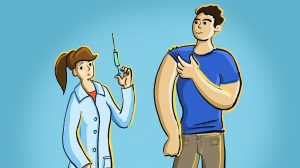 My wife and I got our third COVID vaccine shots the other day. As with the previous two, we’ve had no problems other than some soreness in our arms around the injection sites. Come to think of it, I can’t remember ever having side effects from any vaccination in my entire life.

When I told some friends I’d been boosted with the Moderna version this time, they asked why we’d done that, since we’d been given the Pfizer shots earlier this year. My explanation was simple: that’s what our doctor told us to do, and we trust him. He’s been our physician for more than two decades and we follow his suggestions on all things health-related, so why wouldn’t we do so regarding the vaccines?

When anyone asks me for advice on the subject, I tell them to do exactly what we did — ask your doctor! All year long, too much of the confusion about COVID vaccines has come from people who don’t do that. Instead, they take advice from their Facebook friends, or a colleague in the next cubicle at work, or a popular podcaster — in other words, people with no medical expertise who are only repeating misinformation they heard from someone else.

That’s what frustrated me about coverage of the Aaron Rodgers story. To my knowledge, no reporter asked him if the Packers’ team doctor or his personal physician had told him not to be vaccinated, but instead consume Ivermectin or some homeopathic remedy. By the way, “received homeopathic treatment” is the same as “drank some water.” That’s not science. That’s not medicine. Jake from State Farm won’t cover that.

As for Rodgers’ claim that no one can tell him what to do with his body, I’m sure he would never try that argument during a game if, after he’d been sacked, officials told him he had to leave the field to undergo the NFL concussion protocol in the Packers’ locker room. What would he do, sit down on the field and pout? Everything he’s said on this subject in the last few days has been the verbal equivalent of that.

Until this incident, I held Rodgers in higher esteem than that, so I’m disappointed.

But that’s nothing compared to the relief no doubt expressed by the folks at Sony who didn’t choose him as the new host of “Jeopardy!”