TV Review: “We Need To Talk About Cosby” 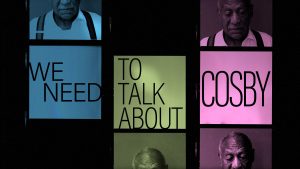 My wife and I just finished watching W. Kamau Bell’s four-part documentary series for Showtime, “We Need To Talk About Cosby.”

In it, Bell does a deep dive on Cosby’s career and the milestones that made him a showbiz legend, from his standup to his sitcom. It also includes references to Cosby projects that didn’t do as well, although there’s no mention of the appallingly bad “Leonard, Part 6.” Along the way, there is commentary from many people who loved Cosby’s work, particularly in the Black community, for whom he was a role model, educator, and — later — an old man scolding them in public. He also advocated for Black people on the crews of his TV series and movies, beginning in the 1960s, when he insisted the producers of “I Spy” hire a Black stuntman to double him, rather than use a white guy literally painted black.

Of course, the doc tells the sordid and horrifying story of the 60 women who came forward to share their accounts of Cosby drugging and raping them while unconscious. Some of them offer the details in a matter-of-fact manner, while others get emotional, and at least one refuses to re-tell the horrors she lived through. Throughout, their stories are consistent — after inviting them to his home, hotel room, or dressing room in the guise of heping them with their careers, Cosby either gave them quaalude pills or spiked their drinks to knock them out. The next thing they knew, they woke up hours later naked, unable to remember what had occurred, and shooed away with a warning to not tell anyone.

The saddest part was that the women felt as if they had done something wrong, an idea he planted in their heads (“You had too much to drink and got sick, so I took care of you”). This man they trusted so much, whose public reputation was as “America’s Dad,” had violated them without their consent, and counted on their embarrassment to keep them from sharing it and besmirching him with the label “America’s Rapist.” Worse, there were so many people who enabled this behavior for decades!

Notably the only cast members of his greatest success, “The Cosby Show,” who agreed to speak with Bell are actors who played minor characters. There’s no Phylicia Rashad, Lisa Bonet, Malcolm Jamal-Warner, Tempestt Bledsoe, or Keshia Knight-Pulliam. Showrunner Matt Williams appears in a few scenes, but claims he never knew anything about what was going on when a long line of models kept showing up at tapings and then made their way individually to Cosby’s dressing room afterwards.

Like some of the talking heads in the documentary, I was a big fan of Cosby’s work, starting with his comedy albums in the 1960s, his appearances on TV variety shows, and his concert movie, “Himself” (which my daughter loved so much she memorized the dentist bit). My father and I sat together to watch his first sitcom, “The Bill Cosby Show,” in 1969. My whole family tuned in each week to watch the adventures of the Huxtable family during its original run and, later, in reruns.

While I now despise Cosby for being a serial rapist, I’ll admit to a smile crossing my face when some of his truly funny comedic moments popped up during Bell’s series. Then again, I also felt my stomach turning while watching clips of Cosby being interviewed by other men who have been revealed as sexual predators (e.g. Matt Lauer, Charlie Rose). Like Bell, I think it’s possible to live with those conflicting thoughts.

“We Need To Talk About Cosby” is available now on the Showtime networks and streaming app.