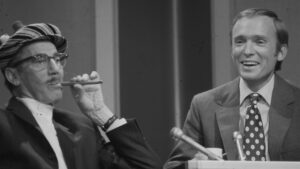 If you’re a Marxist (as I am), you’ll want to set the DVR to record the “American Masters” episode that airs tonight on PBS. It’s entitled “Groucho & Cavett,” and was made by Robert Bader, the same documentarian who made “Ali and Cavett: The Tale Of The Tapes” four years ago, as well as other compilations of Cavett shows.

I haven’t seen the new documentary yet, but I understand it includes Cavett discussing his friendship with Groucho, as well as plenty of footage from the seven times the latter was a guest on the former’s TV show.

Anyone who watches the current lineup of late night shows might be amazed to see the host having an extended conversation with a guest that goes beyond 8-10 minutes. Cavett did that regularly with all sorts of celebrities, authors, and cultural figures, but the way he was clearly in awe of Groucho helped create something special each time they appeared together.

Bader is somewhat of a Marx Brothers expert, so I was happy to have him on my radio show in 2017 to discuss his book about the boys, “Four Of The Three Musketeers.” You can listen to that conversation here.

Years earlier, in one of Cavett’s appearances on my show, we talked about his relationship with Groucho, as well as other guests, including Katharine Hepburn and Alfred Hitchcock. You can listen to that conversation here. And if you want more, there’s my conversation with Cavett about the time he had John Lennon and Yoko Ono in the guest chairs.