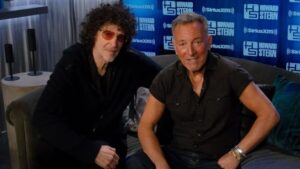 Since I’ve been writing about classic rockers lately (Elton John, Daryl Hall, Todd Rundgren, Pat Benatar), I have to share a few thoughts about Howard Stern’s recent interview of Bruce Springsteen, which is airing this month on HBO. It’s a combination of a great interviewer and a money-in-the-bank guest.

Springsteen’s perfect as an interviewee because he’s such a good storyteller. After all, that is what he has been doing in his songs for more than fifty years. Even though, as he admitted in his Broadway show (which is streaming on Netflix), his tunes weren’t really autobiographical, he’s always been able to set the scenes and characters in listeners’ minds. He did the same in his answers to Stern’s questions, reflecting on many parts of his own personal and professional lives, interspersed with spontaneous performances on both guitar and piano.

As for Stern, his reputation as a master interviewer has only grown. Having some experience in this field, I can tell you the key is that he has clearly prepared — a lot. As he’s talking with Springsteen, you can see he has several sheets of paper in front of him full of printed questions, along with notes scribbled by hand. But Stern doesn’t just stick to the preplanned topics, as too many other hosts do. Stern is clearly listening to Springsteen’s answers and asking follow-up questions, which turn the whole event into a conversation.

Another thing Stern has going for him is his staff, which not only books the guests and gets them into the studio, but ensures the guitars and piano are tuned, the lights all set, and the cameras placed perfectly. They’ve also pulled clips from the interview and posted them online (several are on YouTube). Those are details very few radio hosts can take advantage of.

The Stern-Springsteen episode runs more than two hours, yet doesn’t drag for a single minute. Having never subscribed to SiriusXM, I’m glad HBO and HBOMax are giving it wider distribution.

It’s rare to get such in-depth intimacy between a superstar and a superfan, both still at the top of their game.