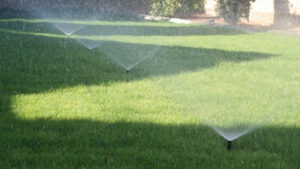 My wife and I were talking about the extreme drought conditions in the southwest that have caused the city of Scottsdale, Arizona, to no longer pipe some of its water to the nearby community of Rio Verde Foothills. Residents there have been forced to skip showers, use paper plates, and do laundry at friends’ houses in other neighborhoods.

It’s not the first time I’ve heard a story like this.

When I visited my brother, Seth, in the home he was renting in Phoenix in the 1980s, I was shocked to see some well-irrigated lawns nearby. Most of his neighbors’ gardens consisted of rocks and cacti, while others had dirt yards painted green, but several selfish homeowners had sprinklers spewing water onto the sod in front of their houses. But even then, they were only allowed to do so every other day, because the authorities recognized the damning impact of a water shortage.

Sadly, Arizona has since allowed water-hogging golf courses to be built by the dozens, as well as too many new housing developments for the meager underwater aquifers to supply. Anyone who has flown to Las Vegas in the last two decades has seen the water crisis from above, as the level of the Colorado River has dropped dramatically and Lake Mead has shrunk so much some of the dead bodies thrown in there during the mob years are no longer covered by the water.

As we discussed the Rio Verde Foothills story, my wife asked, “Without water, how do they brush their teeth?” The answer: bottled water. That’s a concept I became familiar with in 1974 when my parents and I went on vacation in Mexico (I shared that story here). We’d been warned not to drink the water — or eat salads or fruit that had been washed in the community water supplies — to avoid getting a bad case of Montezuma’s Revenge. I was the one sent out to buy bottles of water, but one day while I slept late, my father went on that errand.

Unfortunately, he’d forgotten to buy agua sin gas. When he came home, he used his new purchase to brush his teeth, and I awakened to him laughing hysterically in the bathroom. I ran over and immediately saw the cause of his mirth. He looked like a rabid dog with the foam created by the combination of toothpaste and carbonated water spilling out of his mouth. Taking a couple more swigs and swishing it around in his mouth only made matters worse, but he eventually spit it out, and we continued our vacation free of froth.